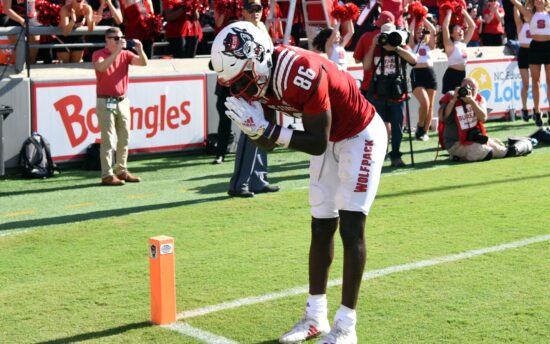 The NC State Wolfpack have climbed to #22 in the AP top 25 after a 4-1 start to the season. NC State makes a visit to the always pesky Boston College Golden Eagles as part of the week 7 NCAA slate. The Wolfpack are -3 point favorites on the road even though BC has started the year 4-1 as well.

NC State is in a tough spot on Saturday night and to be honest it wouldn’t have been a surprise if oddsmakers set them as the underdogs instead of -3 point favorites. The Wolfpack do have a signature win against Clemson this season (27-21) but the Tigers are in a down year. That game was also in Raleigh, where four of the five Wolfpack games have been held this year.

NC State’s only loss this year also happened to come in their only road game, falling 24-10 at Mississippi State in week 2. Make no mistake just having a location advantage hasn’t gotten the Wolfpack to 4-1, as they’ve built the ACC’s #1 defense in total yards and rush yards.

The NC State offense looks solid averaging 32.2 ppg, but aside from Clemson the Wolfpack have beaten South Florida as -19 point favorites, Furman as -27.5 favorites, and Louisiana Tech last week with a line of NCST -17.5.

The Golden Eagles should feel a little slighted being listed as +3 point underdogs in this matchup. Both teams have had a bye last week for extra preparation, and Boston College is playing a Saturday night home game for the first time since 2018. NC State is also going on the road for the first time in over a month.

Much like the Wolfpack, Boston College has had some pretty inferior competition to get to their 4-1 record. The Golden Eagles have been -15 point or better favorites in wins against Colgate, Massachusetts, and Temple.

Competition aside that’s not to say there aren’t some talented players on both teams in this game. NC State QB Devin Leary is completing 67% of his passes and has 12 TD to 2 INT and WR Emeka Emezie has 32 catches on the season. Boston College QB Dennis Grosel threw for 311 yards last week vs. Clemson.

Boston College will be a trendy upset pick in this matchup, playing under the lights on a Saturday night at Alumni Stadium for the first time since 2018. That being said NC State has a talent disparity on offense and a slightly better defense.