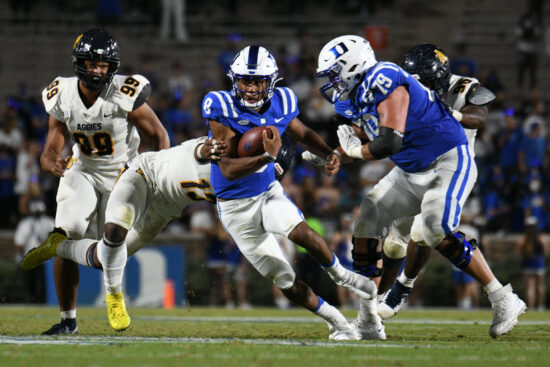 The “Smart Bowl” gets underway on Saturday afternoon in Durham as two Division I academic titans meet up on the gridiron. The Northwestern Wildcats and Duke Blue Devils are similar in a lot of ways, right down to the fact that they’ve split the last 20 meetings between the two and both come into this contest with 1-1 records. Northwestern has had more football success lately going to the Big Ten Championship game last season, but are still just -2.5 point favorites for this matchup.

Northwestern Getting Their Defense Right?

The Wildcats had the #5 scoring defense in the country last season, giving up just 15.5 points/game. That includes allowing just 182.3 yards through the air (14th) and 333.8 total yards (23rd). That success is what made the season-opening 38-21 home loss to Michigan State so surprising, especially with the Spartans rumbling for 337 yards on the ground.

Pat Fitzgerald regrouped and got his team back on track in a 24-6 win over FCS opponent Indiana State last week. Northwestern did not cover the -28.5 point spread and had a lot of their success come via special teams with 158 punt return yards. Evan Hull did run for 126 yards and 2 scores, but three of their first drives in the 2nd half resulted in negative yardage meaning this team still has some offensive questions.

The good news for Northwestern is that their rush defense did a complete 180 last week, holding the Sycamores to just 31 yards on 22 carries. Once again that’s an FCS team though, and Duke has a top 20 rushing attack early in this 2021 campaign.

Blue Devils Primed for the Upset?

When Duke circled this game on the schedule, they probably thought they’d be coming into it undefeated. Sure it was a tough visit to Charlotte in the season opener, but the Blue Devils were still a 6 point favorite in the 31-26 loss, and also beat the 49ers 53-19 last season.

Duke gave up a deflating TD to Charlotte with 0:33 left in their season opener, but they didn’t carry that with them in bouncing back for a 45-17 win over North Carolina A&T. Gunnar Holmberg has been a nice surprise at QB for the Blue Devils completing 71.4% of his passes through his first two collegiate starts. Duke also has the type of back that can put pressure on the Northwestern rush defense, with Mataeo Durant running for 255 yards in the opener and already having 6 rush TDs on the year.

The Blue Devils’ defense is the real big question mark here. Charlotte ran for 154 yards and threw for 324 in the opener, and even North Carolina A&T had 208 on the ground last week.

It wouldn’t have been a surprise to see Duke favored at home in this one. They’ve got a back running well, a young QB gaining confidence every week, and 18,000+ fans wanting bragging rights against another ‘smart school.’