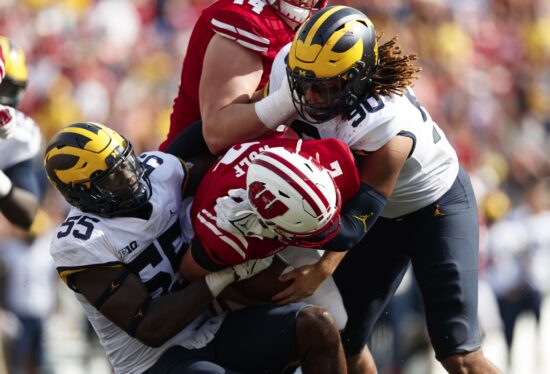 The Michigan Wolverines have won their first six games of the 2021 college football season. And with several top teams above them in the rankings losing in the first half of the year, the Wolverines are just a couple of spots out of the top four already.

This week, Michigan is a heavy favorite to move to 7-0, as they take on a 3-3 Northwestern team that has lacked consistency so far this season.

Northwestern is 3-3 on the year so far, having alternated wins and losses over the course of their first six games. Last week, the Wildcats got a win, beating a hapless Rutgers team at home by a score of 21-7. This week, Northwestern faces a much tougher challenge as they face a Michigan team that is better on offense and defense than any of the opponents Northwestern has faced thus far.

So far this season, Northwestern is allowing more yardage and more points per game than they are earning with their offense. They have yet to break 25 points in a game against a Power 5 opponent this season and could struggle to do so again when they face Michigan. With the Wolverines giving up an average of 15.5 points per game, nothing is likely to come easy for Northwestern here.

Michigan’s last game came two weeks ago when they went to Lincoln and narrowly escaped against the Nebraska Cornhuskers in a Saturday night contest. In Michigan’s 32-29 win over Nebraska, the Wolverines took a 13-0 lead in the second quarter and were outscored 29-16 the rest of the way. Against an offensively challenged Northwestern team, a similarly strong start for the Wolverines could be all that it takes for Jim Harbaugh’s team to build an insurmountable advantage.

If there is a concern for Michigan heading into this game, it is the lack of passing production from Cade McNamara. McNamara has thrown just five touchdown passes so far this season, which has worked against non-conference opponents and lower-tier Big Ten teams. It shouldn’t cost Michigan against Northwestern, but that could be a problem for the Wolverines before the end of the year.

Michigan will move to 7-0 for the year, cover the spread, and set up a potential top-10 matchup against Michigan State for the week after, which will have huge Big Ten championship implications.