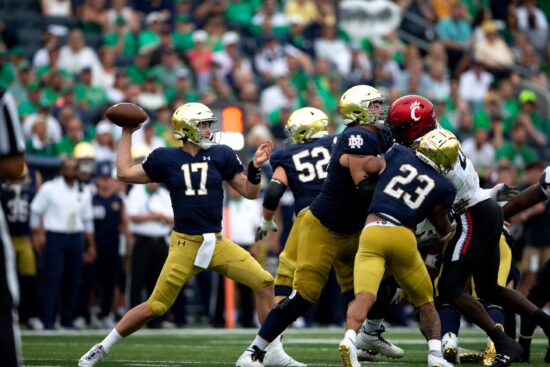 Notre Dame, currently ranked 14th in the nations, head to Virginia after an 11 point loss to Cincinnati. The offense for the Fighting Irish was never able to get going and ended the night scoring only 14 points. The Virginia Tech defense played another great game and was able to walk away with a 21-10 victory.

What Happened to the Offense?

Going into the game against Cincinnati, the Fighting Irish were known for one thing, and that was an electric offense. Averaging over 35 points per game, Notre Dame did not think the offense would be their issue this past weekend. However, Cincinnati had other plans and ended up giving them their first loss of the season.

The game against Cincinnati saw all the quarterbacks get a few reps in for Notre Dame. Jack Coan started the game, completing 14 of 22 passes for 114 yards. He did throw an interception that was returned for a touchdown. Drew Pyne was 9 for 22 for 143 yards and a touchdown.

Defensively, the Fighting Irish played much better than what the score looks like. Two offensive turnovers put Virginia Tech in a position to score, and there was nothing the defense could do about it. When broken down, the defense is only responsible for 14 points, which still would have lost this game, unfortunately.

Winning is Contagious, No Matter Who it’s Against

After a disappointing loss to end September, the Hokies had a little chip on their shoulder this weekend. Losing to a rival school is never easy, but when you can come out and dominate a team from the get-go, there is always a little happiness in that. Virginia Tech will need their defense to keep up this level of play if they are going to win this weekend.

The Virginia Tech quarterback, junior Braxton Burmeister, is off to a solid start, throwing for 746 yards and five touchdowns. He has only thrown a single interception on over 100 attempts. Braxton’s favorite target is Tre Turner, who has recorded 16 receptions for 250 yards and a touchdown.

The defense for the Hokies is top tier. Currently ranked in the top 50 for total yards given up per game, 326, and passing yards per game, 190. The best stat for this team is points given up. In four games, Virginia Tech is only giving up 15.3 points per game, which is good enough for 11th in the nation.

Who will win tonight’s NCAAFB game:

Virginia Tech is 2-2 against the spread, with a 2-1 record while playing at home. Virginia Tech has not gone over the points total once this year.