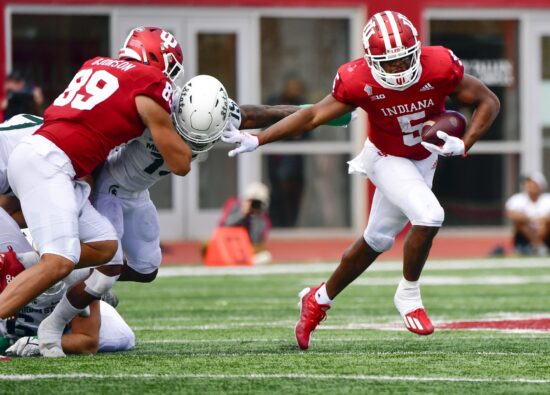 Last season, Indiana was up there with Ohio State as a contender to win the Big Ten. And these two teams combined for one of the more entertaining games of the college football season last year.

This season, these teams are heading in very different directions, as Ohio State has been exceptional in Big Ten conference play, while Indiana has struggled to find its footing for the duration of this season.

When Ohio State lost to Oregon in non-conference play, they knew they would have to be virtually perfect the rest of the way to have a chance to make the College Football Playoff. So far, they have done that, winning their last four games since the loss to Oregon, with two of those four wins coming in conference play. Now at 3-0 in the Big Ten, Ohio State still controls its own destiny as far as their playoff hopes are concerned.

It is worth noting that the recent surge from the Buckeyes has been aided largely by a huge step down in quality of competition in recent weeks. After losing to Oregon, the Buckeyes have beaten Tulsa, Akron, Rutgers, and Maryland. This week, the Buckeyes are in for the biggest test they’ve faced since falling to the Ducks, even if Indiana has struggled through their first six games of the season.

After last year’s incredible campaign, expectations were high for the Indiana Hoosiers coming into this year, and the Hoosiers have not lived up to those expectations. Indiana is 2-4 on the season and has yet to pick up a win over a Big Ten opponent. But the Hoosiers did show last year that they can hang with Ohio State and will look to recapture that magic in this primetime game at home.

In order to have a chance against Ohio State, the Indiana offense will need to put up big numbers against an Ohio State defense that has struggled at times this year. The Buckeyes have looked good on defense against subpar opponents over their last four games. But a quarterback with the ability of Michael Penix Jr. could expose their vulnerabilities all over again.

Ohio State is going to beat the Indiana Hoosiers to move to 4-0 in the Big Ten on the season. But Indiana is more than capable of covering the spread if they can make this game into a track meet.

Ohio State’s defense will be put to the test here, and the Hoosiers will cover the three-touchdown spread despite the likelihood that Ohio State gets the victory.

Expert Pick Against The Spread: