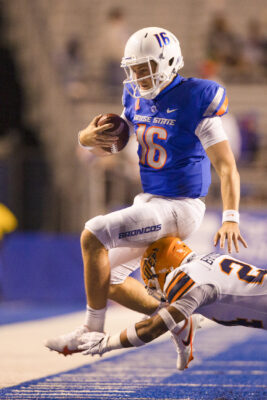 The Oklahoma State Cowboys received 27 votes to move into the AP Top 25, and they’ll likely get into the rankings with a win on the road over the Boise State Broncos on Saturday. OSU is a +3 point underdog in this week 3 matchup despite winning 18 of their last 19 non-conference games. That’s a sign of how badly the Cowboys lack an identity this season, and how tough it’s going to be to get a win on a wild Saturday night on the blue turf.

OSU Has Some Offensive Issues

The Cowboys have started out of the gate pretty slow on offense, which is understandable when you’re trying to replace Chuba Hubbard who is off to the NFL and when starting QB Spencer Sanders missed the opening game of the season due to COVID protocols. Dezmon Jackson ran for 528 yards and a 5.7 ypc average last season but has managed just 6 carries in 2021.

Maybe Sanders will be better in his 2nd game back? Shane Illingworth started the opener and threw for 315 yards, but OSU still struggled with Missouri State in a 23-16 win as -33.5 favorites. Sanders came back and tossed 2 TDs last week, but just 173 yards and a 57.7% completion rate as the Cowboys had to come from behind to beat Tulsa 28-23 at home as -10.5 favorites.

The 21 points in the 4th quarter against Tulsa might be a sign that Oklahoma State is putting things together on offense, but one of those scores was also a 98-yard LD Brown kickoff return. The OSU defense doesn’t get a complete pass either, giving up 200+ passing and 100+ rushing yards to both Missouri State and Tulsa.

Boise’s offense in Neutral as Well

The 54-13 win over UTEP does look nice to pad the stats, but there are still some offensive concerns with this Boise State offense, much like their OSU counterparts on Saturday. The leading rusher through two games has 45 total yards, and as a whole Boise State is averaging just 70 rush yards/game, which is 125th in the country.

Is the Broncos passing game that good to carry the team in a one-dimensional fashion? Hank Bachmeier did throw for 340 yards and 3 TD on just 17 completions last week and could be a 65% or better passer in his third year at the helm. Bachmeier also had Boise State up 21-0 on the road at UCF in the season opener before his defense failed him. That is pretty impressive considering the QB has no run game to fall back on.

Mike Gundy has to be drawing up a game plan similar to what UCF did to outscore Boise State 27-7 over the last three quarters in week 1. The Knights had 255 yards on the ground and 318 through the air in that contest.

OSU getting no love here, +3 point underdogs as they try to get a big road win and climb into the AP Top 25. If Oklahoma State can get their running game going (and they have four quality backs to do so)  they can churn one out here, especially with Boise State having no rush offense of their own.