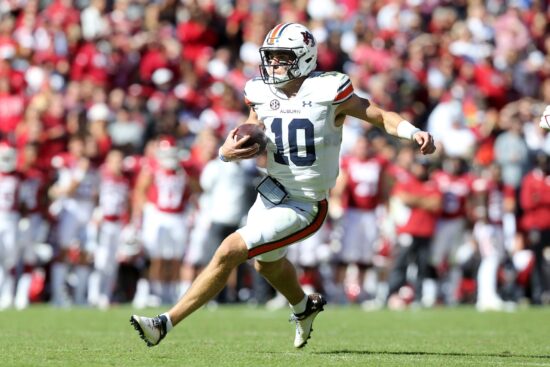 With Alabama in their division in the SEC, Ole Miss and Auburn know that the loser of their game on Saturday is more or less out of the running in the SEC title game chase. Because of that, both teams will play with a sense of urgency that will make their top-20 matchup one to remember. And with two electric quarterbacks leading them, this game is poised to be among the best of the season in college football.

Since losing to Alabama, the Ole Miss Rebels have won three consecutive games against SEC opponents to put them in second place in the SEC West division. They beat Arkansas 52-51 to start their win streak, dodged projectiles from Tennessee fans while beating the Volunteers, and defeated LSU last week to get to 3-1 in conference play. Now, the Rebels must survive a key road test against another team that is still in the running for their division’s title.

In order for Ole Miss to pick up this win, their defense will need to continue to play as well as it has over the last two weeks. The defense of a Lane Kiffin-coached team never needs to be perfect, but Ole Miss has held its opponents to under 30 points in each of their last two games. If they can repeat that against Auburn, Matt Corral and his 24 total touchdowns on the season should be able to get them through with a victory.

Auburn Hanging Around For Now

It hasn’t always been pretty, but Auburn is still in the mix in the SEC West after last week’s win over Arkansas. Auburn is 5-2 on the season, but only one of their losses has come in conference play, with the Tigers falling to Penn State and Georgia on the year. With Alabama still looming on their schedule, a loss to Ole Miss would be fatal to the hopes of Auburn winning their division and playing for the conference championship.

Unfortunately for Auburn, they have the second-best quarterback in this game by a wide margin. While Bo Nix has made some electrifying plays this season, connecting with receivers during scramble drill situations, he only has eight touchdown passes this season. Against a team like Ole Miss with a quarterback who can hurt you every which way, Nix might not be enough to keep up with the Rebels.

The key to this game is going to be stopping the opposing quarterback from finding a rhythm on both sides. For Ole Miss, that should be less of a problem, as Corral’s versatility makes him harder to get out of rhythm than Nix. Expect the Ole Miss Rebels to get a key road win over Auburn in this game and to keep themselves in the hunt for a spot in the SEC championship game while covering as an underdog.

Expert Picks Against the Spread: