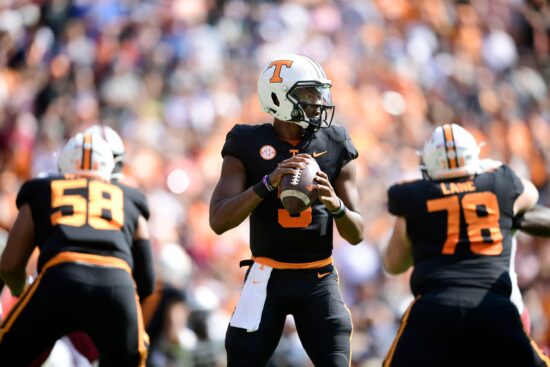 Saturday’s matchup between the Ole Miss Rebels and Tennessee Volunteers looks like it may come down to who has the ball last. That’s exactly the situation Mississippi found themselves in last week in a 52-51 win over Arkansas, and the Vols have an even better offense than the Razorbacks. Oddsmakers can’t find a total high enough to slap on this game, but they’ve gone with an O/U of 82 with Ole Miss a -2.5 favorite.

Matt Corral threw for 2995 yards in 9 games last season and although his 27 TDs were impressive, the 14 INTs were just too much. The reason Corral finds himself in 2nd in Heisman Trophy odds is because he has cut down on those turnovers, throwing 12 TD to 0 INT with a 69.2% completion rate.

It’s Corral’s efficiency but at the same time big play capabilities that make Ole Miss the road favorite on Saturday. The Rebels QB fired a 68-yard scoring strike just 0:15 seconds after Arkansas had tied things up at 45-45 last week. Corral even completed 21 of 29 passes in a 42-21 loss to Alabama the week prior.

While Corral is great, Ole Miss also got a combined 221 yards rushing from the backfield duo of Henry Parrish, Jr. and Snoop Conner. Obviously moving the ball on offense isn’t a concern for the Rebels but how is the Ole Miss defense going to stop Tennessee?

One of the other major reasons why the Volunteers are home underdogs on Saturday night is because they’ll likely be without RB Tiyon Evans who is doubtful with an ankle injury. Evans has 159 and 119 yards rushing the last two weeks with 4 TD.

The dominance of Evans has helped Tennessee amass the #6 rushing offense in college football. His presence would have been huge up against an Ole Miss team that gave up 350 yards on the ground in last week’s 1-point win over Arkansas. The Rebels have the 3rd worst rush defense in the SEC giving up nearly 193.6 YPG.

For as good as Evans is, he’s not a one-man team as QB Hendon Hooker has 13 TD to just 1 INT on the season. Hooker can run the ball too with 148 yards on the ground last week, and it was Arkansas QB K.J. Jefferson who really shredded the Ole Miss defense last week with 85 yards rushing and 3 TD.

The Rebels have an elite offense – but Tennessee isn’t too bad either even with the likely loss of Evans. In a game that could come down to the final possession, the points are very intriguing. Neither of these defenses are great, but Tennessee’s is slightly better especially on a Saturday night in Knoxville in front of 100,000+ fans.