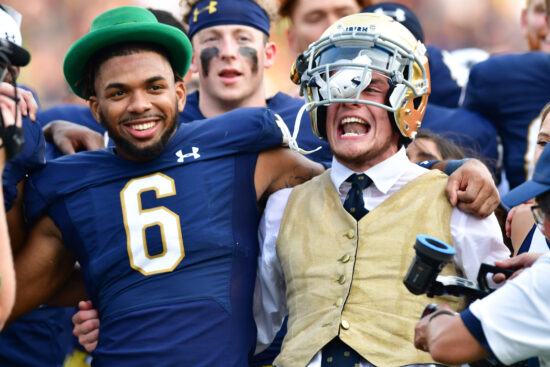 Despite being 2-0, the Notre Dame Fighting Irish have dropped four spots in the current poll to 12 overall. The Irish haven’t been convincing this season, with both of their wins coming by three points over teams that should have lost by much more. The Purdue Boilermakers on the other hand have played exceptionally well this season, defeating their opponents by a total of 58 points, including a 49-0 blowout at UCONN last week.

Purdue Is Coming In Hot

The Boilermakers are averaging 344 passing yards per game, which is good for 10th in the nation. Their passing attack is lead by their junior quarterback, Jack Plummer. Plummer has completed 45 of 61 passing attempts for 558 yards and six touchdowns. On top of those stats, Plummer also hasn’t thrown an interception and has a passer rating of 183. 1. Plummer’s favorite targets include the junior wide receiver, David Bell, and the junior tight end, Payne Durham. Bell has caught 14 passes for 255 yards for three touchdowns. Durham has also caught three touchdown passes on 11 receptions, totaling 174 yards.

Plummer and the wide receivers aren’t the only reason that the Boilermaker offense has put up a combined 79 offensive points this season. The rushing game has been consistent over the first two games of the season as well. The Boilermakers have two rushing touchdowns, by senior Zander Horvath and junior, King Doerue. Though Horvath is currently leading the team, he is out six to eight weeks with a broken fibula. Doerue has stepped up posting 81 rushing yards on 17 attempts. Look for Doerue to continue to carry the load until Horvath’s return.

The defense has been stellar, giving up only 21 points in their first two games, including a shutout last week over UConn. Even though they have been so good, there are no true stats that stand out as spectacular. In two games, the defense has only recorded one sack, two interceptions, and have forced three fumbles.

The Irish Are 2-0, But It Hasn’t Been Pretty

Notre Dame hasn’t lost to the Boilermakers since 2007, and haven’t lost at home since 2004. They look to continue both of those streaks this weekend. The Fighting Irish are right behind the Boilermakers, sitting in 11th overall in totally passing yards, averaging 341.5 yards per game. The Irish are lead by their senior quarterback, Jack Coan. Coan has completed 47 of 68 passing attempts for 605 yards with six touchdown throws. The only issue on Coans resume is the two interceptions that he’s thrown. Even with the interceptions, Coan’s passer rating is 167.1. The senior quarterback has a clear-cut favorite target in his sophomore tight end, Michael Mayer.

The Irish defense on the other hand hasn’t been great, allowing an average of 33.5 points per game. The Irish gave up 442 yards to Florida State and 449 yards to Toledo. If the Irish want to be successful this season, their defense needs to really come together. The defense, even though giving up those gaudy numbers, have sacked the opponent quarterbacks ten times, have had three interceptions, and have forced one fumble. The ground game has been the hardest thing for the Irish to stop this season.

Who Will Win Saturday’s NCAAF Game?