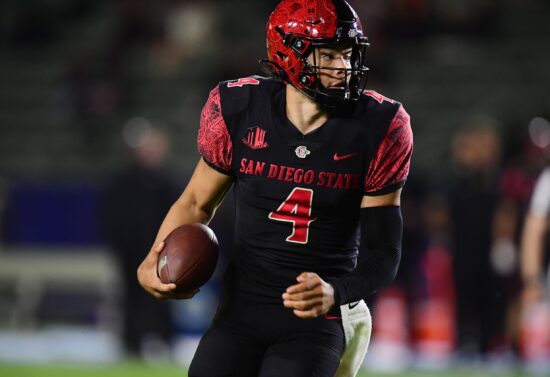 The Mountain West has Friday night lights this week, as the no. 24 San Diego State Aztecs pay a visit to the San Jose State Spartans. The Spartans are the reigning Mountain West champions, although they have a lot of work to do if they expect to repeat.

Meanwhile, the Aztecs are the perennial Mountain West powerhouse and off to a 5-0 start, putting them in a prime position to get back to the top of the conference.

As mentioned, San Diego State is 5-0 on the season, a start that has them ranked in the top-25. The Aztecs have already beaten two Pac-12 teams this season, which is a good sign that they’ll be able to take care of business against the Mountain West. That was certainly the case last week when San Diego State cruised to a 31-7 win over New Mexico.

In classic San Diego State fashion, the Aztecs are getting the job done with a productive rushing attack. Greg Bell has been the team’s feature back, gaining 5.5 yards per carry while already finding the end zone five times in five games. However, quarterback play has been a huge issue, with Jordon Brookshire completing just 47% of his passes on the season and backup Lucas Johnson not providing any answers either.

Of course, the Aztecs can always lean on their defense, which is having another strong season. Not surprisingly, Utah was able to do damage against the Aztecs, scoring 31 points, but the SDSU defense has been otherwise solid, yielding just 16.6 points per game. The Aztecs have also racked up 18 sacks in five games, so they can get after the quarterback, especially when playing with the lead.

After a breakout season in 2020, the Spartans have had mixed results, going 3-3. Granted, one of those losses came against USC, but double-digit losses to Western Michigan and Colorado State have been disappointing. Plus, two of San Jose State’s three wins have come by less than a touchdown, so even in their wins, the Spartans have had to work hard.

Quarterback Nick Starkel was the catalyst for last year’s success. However, he got off to an uneven start this season before getting hurt during the loss to Western Michigan. To be fair, backup Nick Nash has played well in the last two weeks, throwing five touchdowns and just one interception despite some accuracy issues at times.

San Jose State’s problem is that the rest of the team isn’t providing much help for the backup quarterback. The Spartans are gaining just 3.9 yards per carry on the ground and have struggled to find balance offensively. Defensively, the Spartans have allowed more than 30 points in each of their Mountain West games this year, putting a lot of pressure on the offense.

Unless Starkel makes a surprise return to the lineup, the Spartans are going to have a tough time in this game. San Diego State is able to dictate games with its defense and with its running game.

That should be enough for the Aztecs to win comfortably against a mediocre San Jose State team.