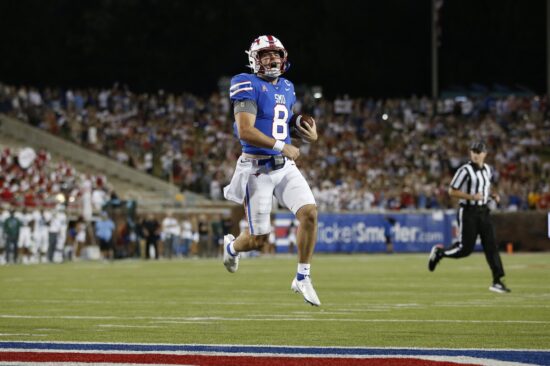 The SMU Mustangs are off to an undefeated 7-0 start but they’ve got a gauntlet upcoming that starts with a visit to the 6-1 Houston Cougars. SMU is well-rested with a win over Tulane last Thursday preceded by an idle week, but will that be enough to get a win against this red-hot Cougars squad?

SMU put up their second 50+ point game of the season last time out in a 55-26 win over Tulane last Thursday night. It was another huge night for QB Tanner Mordecai who had 427 yards and 3 TDs. Mordecai’s 2,320 yards are 8th most in the NCAA, his 29 TDs are tied for first, and he’s also only been sacked twice in 263 attempts.

While Houston’s defense definitely has their hands full with the SMU passing offense, the Mustangs can also run the ball fairly well. SMU puts up 193.9 ypg on the ground which is among the top 40 in the country. RBs Tre Siggers and Ulysses Bentley IV (probable – undisclosed) have both tallied over 400 yards on the ground this season.

Saturday night’s game seems like it will be a shootout with SMU scoring 42.7 ppg and Houston 36.3. Oddsmakers have the betting total at ‘only’ 62 though so does that mean one of these defenses step up? SMU gave up 194 yards rushing to Tulane their last time out which isn’t ideal, but the Green Wave also had the #1 rush offense in the conference last season.

Step Up Game for the Houston Defense?

The Cougars have their work cut out for them against this SMU offense but being at home on a Saturday night definitely helps the situation a bit. Houston also ranks #1 in the AAC in run defense so far (103 ypg) and are 3rd best vs. the pass (174.1 ypg).

The Houston defense isn’t just good by AAC standards, they actually rank #4 in the nation in total yards allowed, and are 17th or better in passing yards, rush yards, and points allowed. Some of that comes from being favored in six of seven games, but the Cougars also dominated Tulsa 45-10 in the only game they were underdogs (+3). The Golden Hurricane had 28 carries for 31 rushing yards in that meeting.

The thing about the Houston defense being so great is that they have the offense to complement it. The Cougars have put up 40+ points in four of their last six-game, but were also stifled a bit last week with just 256 total yards vs. East Carolina. Weather delayed that kickoff several hours though and it was also a ‘look ahead’ situation for Houston to this week’s matchup with SMU.

Houston has a great defense and is at home but SMU has an offense that can move the ball through the air or on the ground. The Cougars are at home, but the Mustangs are also very well rested and have one of the best QBs in the country commanding their offense.

This is going to be a battle for sure, and the 1-point spread indicates as much. Either side is a solid play here.