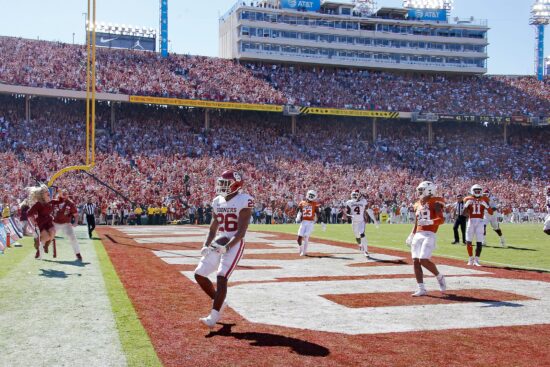 The Oklahoma Sooners have managed to stay undefeated and up to #4 in the top 25 following a 55-48 win over Texas last week. OU was down 28-7 at one point in that game and may have some QB issues coming into the matchup with the TCU Horned Frogs in week 7. Texas Christian bounced back from losses to SMU and Texas with a 52-31 win over Texas Tech last week. OU is a -13.5 favorite for this matchup.

TCU Has Been Consistent

The one game that sticks out for TCU so far this season is the 42-34 home loss to SMU in week 4 as -8 point favorites. Other than that the Horned Frogs have won the games they’re supposed to as favorites and also lost 32-27 to Texas as underdogs.

TCU was a -2.5 favorite last week, but their 52-31 win over Texas Tech was still impressive. The Longhorns racked up nearly 400 yards on the ground alone, with Kendre Miller going for 185 on just 12 carries. Zach Evans added 143 on 17 carries and that’s the type of production needed to hang with OU on Sunday.

A big day running the football was no anomaly for TCU, who is 2nd in the Big 12 with 236.4 YPG on the ground. Evans is the workhorse with four straight 100+ yard games but Miller showed explosiveness with a 45-yard and a 75-yard TD.

OU in a Vulnerable Spot?

Oklahoma survived in the Red River Showdown last week, coming back from a three TD deficit in the 1st quarter to get the 55-48 win. OU coach Lincoln Riley had to make the difficult decision to bench preseason Heisman candidate Spencer Rattler vs. the Longhorns, but freshman Caleb Williams threw for 212 yards and two scores and also rushed for 88 and a TD.

Williams is reported to have taken a majority of the 1st team snaps for the Sooners during the week, meaning he’ll likely make his 1st career start on Saturday. TCU has the #4 defense in the Big 12 (223 YPG), but are also 2nd worst vs. the run (206 YPG). Sooners RB Kennedy Brooks ran through the Texas defense for 217 yards and 2 TDs last week.

OU definitely has some defensive issues to fix as Texas racked up over 500 yards of total offense last week. That includes a 388 yard, 5 TD pass performance from Longhorns QB Casey Thompson. Oklahoma has given up 30+ points to Tulane and Kansas State this season so they can be scored on.

Oklahoma has risen to #4 in the country and are bearing down on a berth in the college football playoff. The Sooners close out the season at Baylor, vs. Iowa State, and against Oklahoma State so they’ll still have some work to do. While the matchup with TCU doesn’t seem like one the Sooners will lose outright, the 13.5 points seems like a lot.