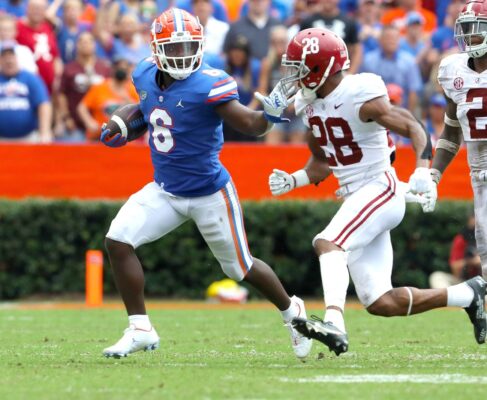 It will be a tale of two teams when the Tennessee Volunteers and the Florida Gators collide this weekend. Both of these teams sit at 2-1; however, Florida has played a much tougher schedule thus far.

Florida is coming off of a two-point loss to Alabama, while Tennessee easily blew out Tennessee Tech. Look for this game to be over early as Florida is the much better team in almost every metric.

While the Florida Gators are definitely the rightful favorites here, it looks like we are in for a very exciting match.

Florida Looks to Prove Themselves

Florida is coming off of a two-point loss to Alabama in a game where they looked really solid. They had two pretty easy wins in the two previous weeks but then proved to be able to hang with the top team in the country. Look for the Gators to try and prove that wasn’t a fluke this week.

Ground Game has Worked for the Gators

Tennessee has easily won two of their games but have not won any games this year that have been marquee wins. The Volunteers need to win this game to give them momentum going forward through the rest of this year. This game against Florida will set them up perfectly for success the rest of the year.

What is the Volunteers Identity on Offense?

Tennessee has averaged 42 points a game this season, and that has been with less than 200 yards per game passing. For Tennessee to be successful, they will need to find an identity on the offensive side of the ball.

Look for them to try and establish the passing game on a defense that has allowed 230 yards per game through the air. If Tennessee cannot do this, then they might be in for a long day.

The talent difference between these two teams is huge. Look for Florida to attack early and often, putting Tennessee in a hole early on.

Florida should be able to come out very quickly in this game. They have had no trouble in their other games and just played a great game against Alabama. Look for the Gators to roll.