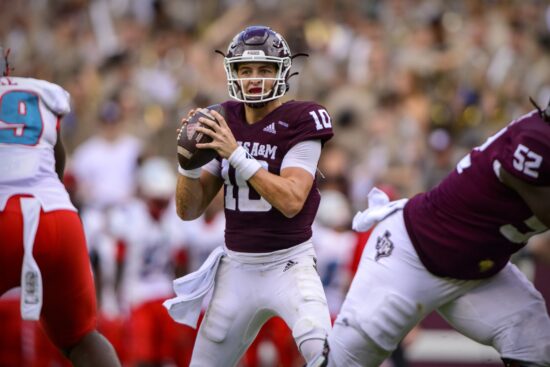 The Aggies of Texas A&M will head to Arkansas to take on the Razorbacks in this SEC matchup. This will be the first conference game for both of these teams. Each of these teams has displayed wildly impressive offenses, as well as defenses that are extremely tough to score on.

Until this point, Texas A&M hasn’t really played anyone worthwhile. The players do not get to pick their schedule, however, and have done everything they are supposed to do. Winning their first three games by a combined score of 84-17.

The quarterback from Texas A&M, Zach Calzada, was okay Saturday. He completed 19 of 33 passes for 275 yards. Isaiah Spiller was one of six players who had rushing attempts Saturday, rushing for 117 yards on 15 carries, with one touchdown. There were seven different players who received receptions on Saturday.

The Aggies’ defense has been just about perfect throughout their first three games. On Saturday, they made it impossible for New Mexico to do anything. They held the New Mexico quarterback to under 50 yards passing. The Aggies had a total of four sacks on the day.

Razorbacks Look to Keep Up the Momentum

While 3-0 is a big deal for every NCAA football team, but Arkansas has failed to secure three wins total in the last two years. Coach Sam Pittman, who was at Arkansas in 2020, has his first true recruiting class this season. The team has also brought in new offensive and defensive coordinators, which clearly have the team trending in the right direction.

KJ Jefferson, Arkansas quarterback, was 13 of 23 for 326 yards and three touchdowns on Saturday. He also added almost twenty yards of rushing. The Razorbacks split carries amongst several different players on Saturday, totaling 269 yards on the ground.

The defense for the Razorbacks had another solid performance as well. Giving up only 10 points, this makes their average points per game 16. If Arkansas is going to stay competitive against Texas A&M, they are going to need to find a way to get to the quarterback. In three games, they have only compiled seven total sacks.

This game is going to come down to quarterback play. While it is evident that both teams have top-notch defenses, turnovers are going to make or break offensive possessions. The quarterback who has the least amount of turnovers will win this game.