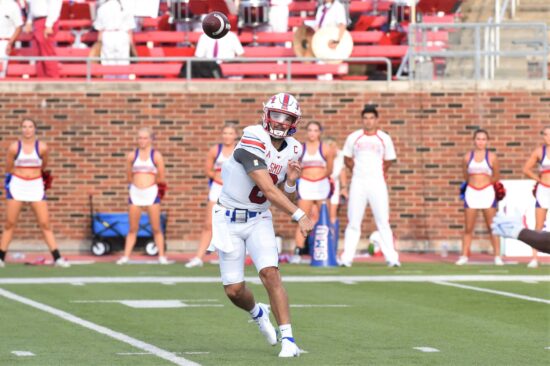 The next challenge for the SMU Mustangs comes on Thursday when the Tulane Green Wave comes to town. Southern Methodist has pushed their record to 6-0 on the year, coming back from a 21-7 deficit to Navy two weeks ago before a 31-24 win. The Green Wave fell 40-22 at home to Houston last week for their fourth straight loss and are +14 underdogs in this matchup.

The Green Wave have their work cut out for them on Thursday night, having to go on the road and face a refreshed SMU team that had a bye last week. The Mustangs also have the #7 total offense in the country (513 ypg) and put up the 14th most passing yards in the nation (315.8).

Tulane (1-5) has also allowed 92 points over the last two weeks and have given up 40+ in four of six games this season. Houston threw for 288 yards and ran for 147 last week vs. Tulane and East Carolina had 310 yards rushing and 302 through the air the game prior. SMU’s offense is eager for this matchup.

Can the Green Wave offense hang with SMU in a potential shootout? Tulane did have a 22-17 lead in the 3rd quarter last week vs. Houston and got a 20/30 day passing from Michael Pratt with 2 TDs. Both Tyjae Spears and Cameron Carroll also had 60+ yards on the ground so the Green Wave do have some offensive versatility.

The Mustangs had some struggles in their win over Navy, tied 24-24 into the 4th quarter before pulling out a 31-24 win on a 22-yard Jordan Kerley TD catch. Tanner Mordecai had his 5th 300+ yard game in six outings this season and his 2 TD passes were also the first time the Junior had less than four throwing scores in a game all year.

Mordecai is an Oklahoma transfer that is tied for the lead in the country with 26 TD passes. Mordecai has thrown five INTs over the last three games, but his offensive line has also been great giving up just one sack this season.

The Green Wave have struggled vs. the pass (277.2) as well as the run (198.0) this season and SMU also has a competent rushing attack. RBs Tre Siggers and Ulysses Bentley IV have combined for 798 yards rushing on the season.

It’s possible that SMU is looking ahead to a matchup with 5-1 Houston next week, but even on a down night, the Tulane defense is so bad that the Mustangs should be able to cover the 2 TD spread. Mordecai is putting up insane numbers in the SMU passing game so 40 points seems like the floor for the Mustangs.