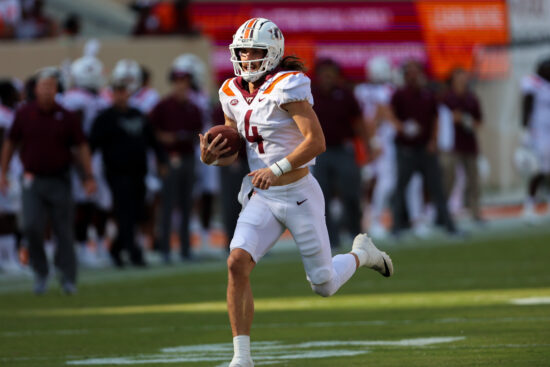 Oddsmakers are giving Morgantown the edge on Saturday afternoon, listing #15 Virginia Tech (2-0) as underdogs as they head into a hostile environment for their first road game of the season. VT has played some of the best defense in the country through two games, but bettors may be thinking that changes against the experienced offense of the West Virginia Mountaineers. WVU is a -2.5 favorite despite starting the season 1-1.

Back the Tech Defense?

2020 was a wild season, as they went 5-6 in the ACC but were also defined by their offense instead of defense and special teams. The Hokies ended up ranking 11th in the country in rush yards at 240.1 per game and were 30th in total yards with 440.7.

Through two games in 2021, Virginia Tech has yet to find that offensive explosion from a season ago but that’s expected when QB Herndon Hooker (18 total TDs) has transferred to Indiana and Khalil Herbert (1162 rush yards) is off to the NFL. VT has still managed to start off 2-0 even while working in some new faces, and the running game showed some signs of life last week with 224 yards albeit against Middle Tennessee State as -20 point favorites.

One aspect of the Hokies that does look to be back this season is their defense. Make no mistake the VT defense wasn’t bad in 2020, but they were very much bend but don’t break – ranking 93rd in passing yards allowed and 70th in total yards but still allowing just 12 ppg. The Hokies shut down preseason Heisman candidate Sam Howell and North Carolina to just 10 points in the season opener, picking the QB off three times.

WVU probably expected to come into the “Battle for the Black Diamond Trophy” undefeated, but slipped up on the road at Maryland losing 30-24 as -2.5 favorites in the 2021 opener. The Terps’ have a good squad this year though, and Taulia Tagovailoa was great throwing for 332 yards and 3 TD while Tayon Fleet-Davis added another 123 on 18 carries on the ground.

The Mountaineers obviously had some defensive questions after the defeat to Maryland, but put some of those to bed with a 66-0 win over Long Island University last week covering the 50-point spread.

WVU has the QB experience to try and exploit the Virginia Tech defense, as Sr. Jarret Doege is coming off a 14 TD, 4 INT season a year ago. West Virginia has the #20 passing attack in the country after two games, but Leddie Brown has also scored a couple of rushing TDs in both games so far in 2021.

There’s got to be some reason why WVU is favored over #15 Virginia Tech on Saturday. Sure Morgantown is a crazy atmosphere, but the Hokies looked pretty impressive in taking down then #10 North Carolina in the season opener. VT + the points looks like an outstanding pick and will get hammered by the public – which is why I would go the opposite here.