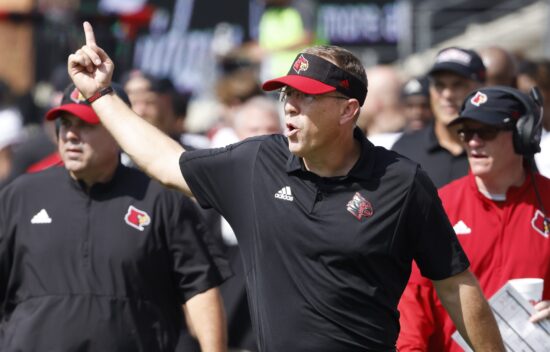 A couple of teams who had their previous game decided in the final minute meet-up on Saturday when the Virginia Cavaliers visit the Louisville Cardinals. UVA has the better momentum after Miami missed a FG with 0:02 left to give the Cavs a 30-28 win. Louisville meanwhile had their three-game win streak snapped when Wake Forest made a FG with 0:22 remaining for the 37-34 victory.

Oddsmakers have Louisville a -2.5 home favorite in this contest with an O/U of 69.5.

The Cavaliers come into this week 6 matchup with the #2 offense in the ACC putting up 513.7 yards/game. Most of that success has come on the arm of QB Brennan Armstrong, who is actually coming off his lowest passing output of the season with 268 yards vs. Miami.

Virginia showing some balance last week vs. the Hurricanes is actually a good thing. The Cavaliers ran the ball 35 times for 181 yards and were just 2-2 in the previous four games of the season with Armstrong having three 400+ yard games mixed in there. UVA still has the #2 passing attack in the entire nation..

Virginia is not the only offense that can move the ball taking the field Saturday. Louisville has the #5 passing offense in the ACC which is going to put some pressure on the Cavaliers defense. UVA did give up a 111 yard rushing game to Cam’ron Harris last week, but did a solid job in limiting Miami to 203 yards passing. UNC’s Sam Howell had 5 TD passes vs. Virginia however in the Tar Heels’ 59-39 win in week 3.

Louisville Tries to Get Back on Track

The Cardinals had a nice run going with wins over UCF and Florida State as part of their 3-game win streak – both of those victories as underdogs. Louisville knew it was going to be a tough matchup last week going to #24 Wake as TD underdogs, but the team fought hard in a 37-34 loss.

The main positive to take away from the loss to the Demon Deacons is that Malik Cunningham continues to be a force, throwing for 309 yards and 2 TD while also running for 46 yards and 2 scores. Cunningham is second in the country with 10 rush TDs, and has added another 7 TD with 2 INT through the air.

Louisville did lose this contest 31-17 last season on the road as +6.5 underdogs. Cunningham did run for 197 yards and 2 TD though so the Cavaliers have a hard time scheming for the dynamic Cardinals QB. Louisville had 317 yards on the ground while Virginia had just 365 yards total and UVA still picked up the win.

It makes you wonder what more Louisville can do than have 300+ yards rushing vs. Virginia last season and still lose by 2 TDs. Armstrong is a much-improved QB as well although this game is back in Kentucky. There’s going to be some scoring in this one (O/U 69.5) and ultimately being at home gives the Cardinals the edge.

NCAA Football Pick(s) Against the Spread: