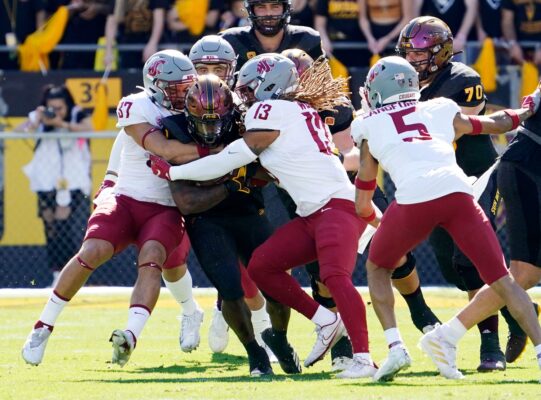 This season, the Oregon Ducks have led the Pac-12 North from start to finish and find themselves in the top-four of the College Football Playoff rankings. But the Ducks are far from a guarantee to win their own division in the Pac-12, let alone to make the playoff.

This weekend, they face a hungry Washington State team in a game that will determine who comes out of this week with the lead in the Pac-12 North coming into the home stretch of the season.

Washington State Hanging In There

It has been a turbulent season for the Washington State Cougars, who opened the year with a loss out of conference to Utah State. Since then, they have lost two conference games, another non-conference game, and their head coach. But the Cougars are still in a position to where they would be in the lead in the Pac-12 North if they can get the better of the Oregon Ducks in Eugene on Saturday night.

Washington State has won four straight conference games to move into second place in the division standings. That run includes a win over a team in Stanford that had handed Oregon its only loss of the season. In order to extend their Pac-12 winning streak, the Cougars need to bring their best offensively, as the Cougars are averaging ten fewer points per game than the Ducks on the season thus far.

Oregon has responded well to its first loss of the season, following up that loss at Stanford with four straight wins in Pac-12 play. Last week, Oregon overcame some torrential rain and a game Washington Huskies team to move to 8-1 on the year. Now, Oregon will presumably move into the top-three of the College Football Playoff rankings, and the Ducks will simply need to keep rolling at home to remain there.

Oregon’s offense is averaging over 200 yards per game both through the air and on the ground, with Travis Dye serving as the driving force behind their offense on the ground.

Dye has 11 rushing touchdowns on the season, leading an Oregon offense that is averaging exactly 35 points per game on the season thus far. A performance that lives up to that average this week on offense may be too much for Washington State to overcome.

Oregon should be able to win this game against Washington State by virtue of their offense being much more explosive and well-rounded than that of the Cougars. But this game should also be relatively close, as Oregon has shown multiple times this season that they are not able to consistently blow inferior competition off the field.

Two touchdowns is too many points to lay with Oregon, and Washington State is the play here.