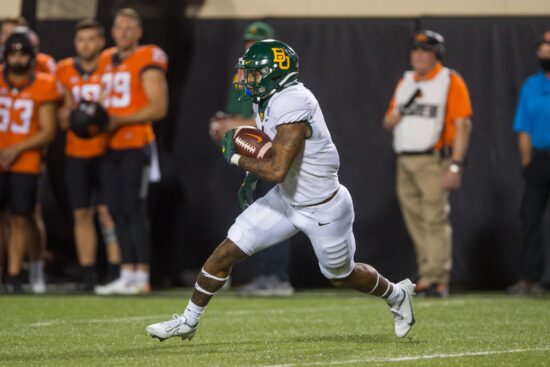 The 4-1 Baylor Bears look like a solid play on paper at home as just -3 point favorites against the 2-3 West Virginia Mountaineers. While WVU is in the midst of a slump, they’ve lost the last two weeks against Oklahoma and Texas Tech via last-minute FGs and fell in the season opener by one score against what is now a 4-1 Maryland team.

Can Doege Bring Mountaineers Back

We are talking about this West Virginia team in a whole different light if they got off to a better start in the season opener falling down 17-7 to Maryland in the 1st quarter. WVU also held a 13-10 lead over Oklahoma heading into the 4th quarter in week 4 and were tied 20-20 with Texas Tech going into the last minute of the 4th quarter last week. All of these ended up being WVU losses.

Being 2-3 with three close losses isn’t supposed to happen for the Mountaineers with a Senior QB in Jarrett Doege. Despite a couple narrow defeats, Doege has just 1 TD and 1 INT the last two weeks although he did hit on 25 of 33 passes for 318 yards last Saturday vs. the Red Raiders. The Doege ratio isn’t great this year, with 7 TD to 4 INT on the season, once again weak numbers for an experienced QB.

Neal Brown would be wise to lean more on his run game on Saturday afternoon compared to the passing attack. That’s what worked in last year’s 27-21 home win over Baylor with Leddie Brown carrying the ball 27 times for 93 yards and two scores. Brown has 6 rushing TDs in five games this season but has only piled up 113 yards total the past two weeks.

The Bears got off to an impressive 3-0 start this season but they were also nearly 2 TD favorites in each of those wins. It’s still hard to get a read on Baylor after the past two games, where they have beaten Iowa State 31-29 at home as +6.5 underdogs and also lost 24-14 at Oklahoma State as +4 point ‘dogs.

Baylor has had to replace 4-year QB Charlie Brewer as he has transferred to Utah this season, but they have to like what they see in Gerry Bohanon who has 7 TD to 0 INT so far on the year. Bohanon has hit 73% or better of his passes in two of the last three, but WVU has a top 10 team vs. the pass this season.

West Virginia had a top 25 defensive unit last season, and they’ve played well again this year. WVU’s run defense is 11th in the country, which is huge because the Bears have a couple of 340+ yard rushers in Abram Smith and Trestan Ebner. Smith’s 510 yards rushing are in the top 20 in the country.

IThe Mountaineers won this game at home last year, but Baylor may return the favor this season. WVU has had a knack for keeping their losses close this year, but we really don’t know how dominant the Bears can be in Waco as three of their five games have come on the road this season. Bohanon doesn’t turn the ball over and Baylor can run the ball, which is a very solid recipe.