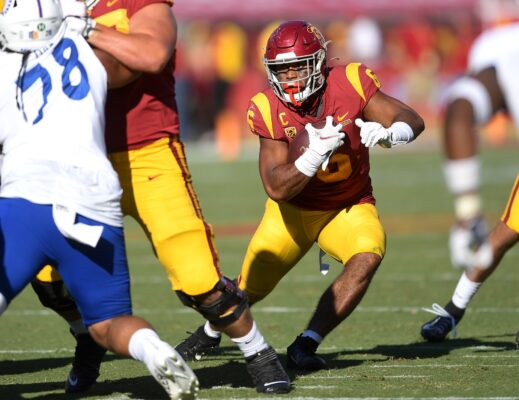 Stanford heads to the Los Angeles Memorial Coliseum to face their rival USC. Unfortunately, they’ll be heading there with more questions about the quarterback position. They’ll be making a move, giving Tanner McKee the start after a tough game from Jack West. West isn’t all to blame for the loss to Kansas State, though. The defense didn’t do much to help the Cardinal offense either.

USC is coming off a big win over San Jose State, in part to a big game by Drake London. They’ll likely look to exploit the same holes in the Stanford secondary on Saturday. They’ve got a hefty spread to cover, but they covered the -14 against San Jose. With the Trojans looking to rise back to elite ranks, a dominant win over Stanford is needed.

Will the change at quarterback fix Stanford’s offense?

This is a big question surrounding the Stanford offense after a terrible outing against Kansas State. Jack West started the game, but Tanner McKee played most of it, throwing for 118 yards and a touchdown. The plans have changed for Stanford, who originally said that they’d be rotating quarterbacks. After Jack West threw two interceptions early in the game, Stanford abandoned that idea.

Stanford was unable to score up until the fourth quarter with 3:16 remaining. When it comes to considering them against the spread, it’s probably a bad idea. The offense has a lot of kinks to work out, and the defense wasn’t much help. Considering USC won big over San Jose State, the offense might be too much for Stanford to handle.

The Trojans haven’t been performing up to their ability in the last few years, but they started hot in 2021. The win over San Jose State to start the season is definitely great for morale. Now they’ll face a rival team still struggling to decide what the best move at QB is. Putting pressure on Tanner McKee early is going to be a key to the Trojans’ success on Saturday.

The Trojans come in at -17 this weekend, but that shouldn’t discourage you. They covered the San Jose State spread with ease, so Stanford should be no trouble. As long as the offense has the same output from last week, the Stanford defense will have trouble adjusting. More importantly, the lackluster offense from Stanford will give USC the chance to score often.

The Trojans are the best team to pick on Saturday. While Stanford still works out the quarterback carousel, USC will take the win. Another important note is that each of these games is vital to the USC Trojans climbing in the ranks. If they want to return to their former glory, handily beating a rival will do great for rankings.