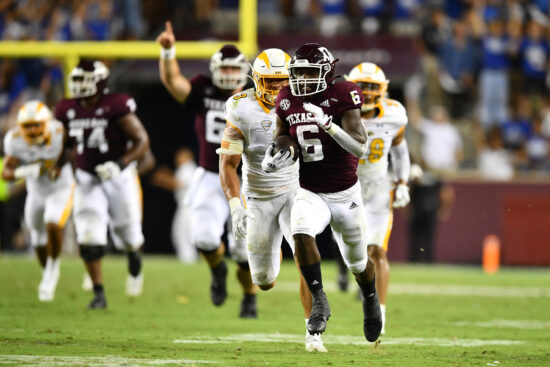 The Colorado Buffaloes tallied a 4-TD win in their season opener against an FCS team, but the challenge gets a bit tougher when the #5 Texas A&M Aggies come to town. Well, technically the Aggies don’t come to Boulder, CO, as this game will be played in Denver at Empower Field. The home of the Broncos can hold roughly 22,000 more fans, will that give Colorado an edge to keep things within the +17 number?

Aggies Need to Dial In Offense

Texas A&M was a -29 point favorite in week one, but they found themselves with just a 10-3 lead over Kent State at the half. They needed big plays in the form of an 85-yard interception return by Leon O’Neal, Jr. and a 63-yard run by Devin Achane but were able to cover the number nonetheless in a 41-10 win over the Golden Flashes.

Some growing pains are expected from the Aggies, especially on offense as they try to replace former Heisman candidate Kellen Mond who is off to the NFL. Redshirt freshman Haynes King did begin 6 for 6 in his first college start, but finished 21/33 for 292 yards and also tossed 3 interceptions. Will King make those same mistakes as he goes on the road for the 1st time in his career?

The good news for King is that he looks to have a solid stable of running backs to rely on in Saturday’s visit to Denver. Achane finished with 124 yards on just 12 carries thanks to his long run and Isaiah Spiller looks back in form with 113 yards on 17 carries. Spiller has averaged 5.6 ypc in his first two seasons at College Station.

Colorado Has a Test

King is a young QB for Texas A&M, but that will be a wash on Saturday as Colorado also starts a QB in Brendon Lewis. That wasn’t necessarily by design as J.T. Shrout was the starter until suffering a shoulder injury in the preseason. Lewis has had a couple of weeks to adapt with the 1’s, and was a manageable 10 for 15 for 102 yards and a TD in his college debut last week.

The Colorado ground game isn’t as high-powered as the Aggies’, but it was solid last week led by Jarek Broussard who had 94 yards on 15 carries. Four different Buffs’ players had a rushing TD as the team put up 281 yards on the ground vs. Northern Colorado.

One big area of momentum that Colorado brings into Saturday’s contest is that they held Northern Colorado to just 20 yards rushing last week on 18 carries. Obviously, Texas A&M is a much bigger test, but the success in the opener is something to build on.

Neither team has experience at QB, but the Aggies have much more explosiveness surrounding their young signal-caller which gives them an edge on Saturday. A two TD spread would’ve been ideal in this one, but the Texas A&M defense can step up to help clear the -17.