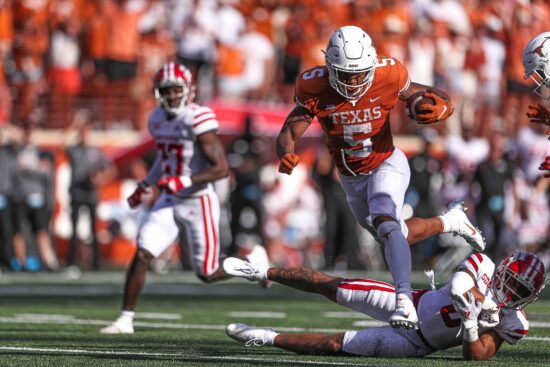 The Texas Longhorns have a lot to prove this year, and they got the season off to a great start. They throttled the Louisiana Ragin’ Cajuns last week, winning 38-18. Now, they have their eyes set on the Razorbacks, who are coming off a win of their own. Texas Longhorn’s QB, Hudson Card, looked great against Louisiana, but how will he fair against Arkansas.

Arkansas has a 1-0 record of their own with a big win over Rice. The fourth-quarter surge lifted them past their opponent and beyond. This week they face a much tougher test, but only come in as slight underdogs. This means that even the sportsbooks are taking into account the talent on the Razorback offense.

It seems like Hudson Card was the best pick to make at the quarterback spot for Texas. After a great game against Louisiana, he strides in to take on the Razorbacks. He finished Week 1 with 224 yards passing and two touchdowns. He even ran one in for a touchdown. Overall, it seems like the Longhorns have their future quarterback for a couple of years.

The Longhorns easily covered the 8-point spread against the Ragin Cajun’s. The questions surrounding their offense were answered early in the first half. From that point on, it was all Texas Longhorns, as their offense was too much for Louisiana to bear. They’ll face a similar offense when they play the Razorbacks.

Razorbacks Look to pull off a Huge Upset

The Arkansas Razorbacks finished week one with a big win over Rice. At the beginning of the fourth quarter, they were down 17-7. From that point on, the Razorbacks scored 31 unanswered points and won the game 38-17. A remarkable comeback and a dominating fourth quarter let the Razorbacks avoid an upset.

They were -20-points against the spread against Rice, so they just barely covered. The good thing about Arkansas is they aren’t worried about putting their foot on the gas. They scored often and efficiently and will hope to do so against Texas. How easily they’ll be able to do that is still uncertain.

Who will win tonight’s Longhorns vs Razorbacks game:

The Longhorns have found their groove, and we don’t believe that Arkansas will be able to stop it. Hudson Card is playing a defense familiar to the Ragin’ Cajuns, so he should be able to exploit it. Arkansas, on the other hand, almost lost the game to Rice, had it not been for an amazing comeback. Go with the team with consistency here, the Texas Longhorns.