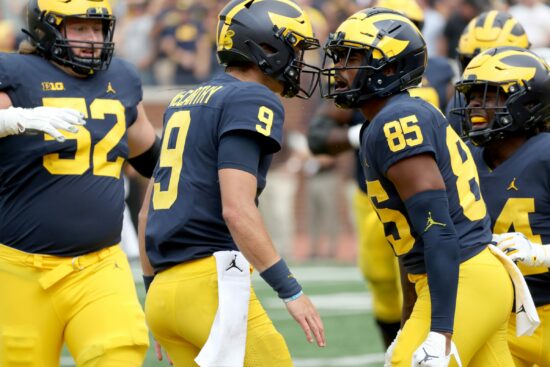 The Washington Huskies were ranked at No.20 before their first game of the year against Montana. By the end of the game, the Huskies saw their rank stripped after a 13-7 loss. The offense had a hard time getting going and was stalled out by Montana. The coaching staff and the organization were disappointed in their group and vowed to make amends.

The Michigan Wolverines contrarily started their season off with a bang. The offense fired on all cylinders and drilled Western Michigan 47-14. Coach John Harbaugh and the rest of the coaching staff stated they have lofty goals this year. With that win over Western Michigan, the Wolverines are starting to be taken seriously.

Can the Huskies get back on track versus Michigan?

Fans of the Washington Huskies were stunned when the final score ended at 13-7. Jimmy Lake said that the fans had every right to be “pissed” at them for the performance. QB Dylan Morris threw three interceptions with zero touchdowns. We aren’t sure whether or not the Huskies will make a change at the position before Saturday.

Heading into the season, the Huskies were thought to be a pretty good team. Somehow, even with their performance last week, analysts are picking them to win. They come in as 6.5-point underdogs, but with that performance from last week, we’re surprised the spread isn’t higher. Hopefully, the coaching staff has prepared them for their game against Michigan.

Expectations over the last few years have been high for Michigan. It seems like even they are starting to take these expectations seriously. They began the season with a huge win over Western Michigan, but they lost Ronnie Bell in the process. This will be a blow to the receiving corps, but we expect Michigan to overcome.

They ended up racking over 550 yards of total offense against the Broncos. They didn’t have to do much aside from run the ball, with 3 touchdown runs over 20 yards. The plan will likely be similar when they face the Huskies. The only looming question now is whether the Wolverines can cover the spread.

Who will win the Washington vs Michigan game:

One of these teams has a lot of adjustments to make before they’ll start winning games. That team would be the Washington Huskies. The loss to Montana has to make bettors reconsider adding them to their ticket on Saturday. The Wolverines are coming off an incredible win and want to keep the wave going. Look for Michigan to have another dominant showing on Saturday.