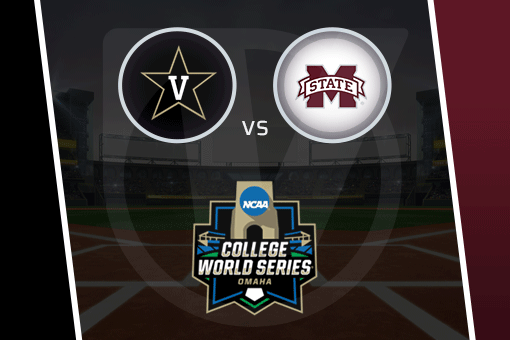 The stage is set for Game 3 of the 2021 College World Series, with the winner claiming the title. A win for Vandy gives the Commodores back-to-back titles and third championship in program history. If the Bulldogs take the crown, it will be the first national title for any sport in the school’s history.

Mississippi State plated 13 runs to upend the Commodores, 13-2, in Game 2 of the CWS championship best of three series. Game 2 had a two-hour weather delay that pushed the start of the contest to 9 p.m. EST.

Commodores Hope Rocker is the Answer

Vandy took one on the chin in Game 2, suffering one of its worst losses of the season. During the game, the Commodores looked out of sorts, struggling to make committing three errors and mustering up just four hits.

Cj Rodriguez got the Commodores on the board early with a solo home run in the second inning. However, that would be the only run Vandy would score until the ninth when Maxwell Romero Jr. connected on a lone home run to right center.

Kumar Rocker is the likely starter for Game 3. The 2019 CWS Most Valuable Player is a surefire top 10 pick in the upcoming MLB Draft. After a shaky outing in the CWS opener against Arizona, Rocker settled down to defeat NC State behind 6.0 innings, one earned run, and 11 strikeout performance.

MSU On the Verge of History

The Mississippi State Bulldogs are a victory away from taking home the first national title in any team sport in school history. MSU has been here before, finishing runner-up to UCLA in the 2013 CWS championship series.

Mississippi State got the bats going early, scoring eight runs over the first five innings of play. A five-run seventh inning capped a scoring outburst by the Bulldogs, who tallied 14 hits and ten walks on the night while benefitting from Vandy’s defensive mishaps. Scotty Dubrule collected a pair of hits and a team-high four RBIs in the victory.

Will Bednar, the team’s ace, threw Saturday against Texas but should have had enough rest to take the mound tonight for the Bulldogs. With Bednar pitching on short rest, expect to see relief pitcher Landon Sims early.

Commodores vs Bulldogs Prediction and Pick

Rocker versus Bednar is going to be a fantastic Game 3 showdown between two elite throwers. Both pitchers picked up wins for their teams when the two teams met for an SEC series earlier in the year.

It is hard to root against the Bulldogs and the history they have the chance to make for their fans and program, but Rocker rose to the challenge in 2019 as a freshman, and history has the tendency to repeat itself.