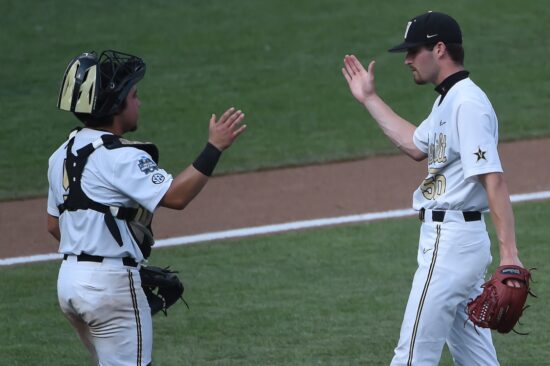 The teams, who have faced each other four times already this season, got to the finals in very different ways. Vanderbilt came through the losers bracket with a walk-off win over Stanford and advanced when North Carolina State entered COVID protocol. Meanwhile, the Bulldogs won their first two games, lost Friday before beating Texas on a single walk-off Saturday.

Vanderbilt hosted Mississippi State in April and won the series with wins on Friday and Sunday. The Bulldogs took the middle game 7-4 while Vandy won by scores of 6-2 and 7-4.

Vanderbilt, who won the most recent College World Series in 2019, begin the series as the favorites. The Commodores are -200 to win the series with Mississippi State at +150.

With his dad, former MLB hurler Al Leiter in the stands, the draft-eligible sophomore struck out 15 against NC State on Monday but took a 1-0 loss. He is 10-4 on the season with a 2.08 ERA and needs 11 strikeouts to tie David Price’s single-season school record.

The good news for MSU is they put a rare four runs on Leiter with six hits over five innings in the 7-4 win. That was Leiter’s first loss of the season after a 7-0 start to the campaign.

The other aces may not be available until Wednesday’s final game as Kumar Rocker (Vandy) and Houston Harding (MSU) started on Friday, with Will Bednar (MSU) starting Saturday in the semifinals. If the Bulldogs get to Bednar, look out, he had 15 strikeouts in his first CWS start and has 22 over 12 ⅓ innings in Omaha.

Mississippi State has the best bullpen in the nation, and it revolves around closer Landon Sims. Sims has closed out all three of the Bulldogs wins in Omaha with one run allowed over seven innings while striking out 11. He and setup man Preston Johnson are both well-rested and are a big reason why MSU leads the nation in strikeouts per nine innings.

At the plate, leadoff man Rowdey Jordan is 6-for-17 in Omaha, while Tanner Allen has five hits behind him in the lineup. Catcher Logan Tanner had an RBI in both games against Texas with three hits in his last two games.

Vanderbilt is in their fourth championship series since 2014 with two wins, but Rocker is the only player with vast finals experience as the 2019 Most Outstanding Player. Rocker should start game two with freshman Christian Little likely for game three if needed.

At the plate, freshman Enrique Bradfield Jr. keys the Dores from the top of the order. The speedster leads the nation with 46 stolen bases while Dominic Keegan hit his 15th home run on Wednesday night. Keegan has six hits and four runs scored in Omaha, while Carter Young and Jayson Gonzalez have also homered

The last time Vanderbilt went for a repeat, they fell to Virginia in the 2015 finals. The weather could be an issue in Omaha as well, so take that into consideration before placing bets. There’s a better than 40 percent chance of rain each day, and any rain delay would impact the starting pitcher’s ability to go deep in games.