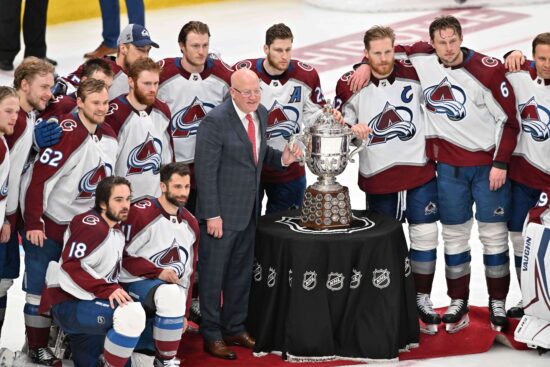 The first team playing in the Stanley Cup finals this season has been determined. That has led to the Colorado Avalanche’s odds being cut to winning the major honor. The team that will join them in the finals series is yet to be decided, as the New York Rangers and Tampa Bay Lightning clash in game four of their series on Tuesday.

It has been an excellent season for the Colorado Avalanche, and they have long been seen as the outstanding chance to win the Stanley Cup this term. At the beginning of the campaign, they were the clear favorites ahead of the Vegas Golden Knights and Tampa Bay Lightning. In fact, we could end up with the finals series that the bookmakers believed would be correct at the beginning of the campaign, as the odds suggested that the Avalanche vs Lightning was the most likely finals series.

However, there could yet be fans holding out on the Rangers reaching the Stanley Cup finals to take on the Avalanche. That was a +4500 chance back in September. But, one thing is for certain, the Avalanche will head into the finals as the leading contenders to take their first Stanley Cup in over 20 years. At present, they are as short as -210 in the betting to win the top prize. But, they will likely drift once the finals series is officially confirmed.

There’s no denying that the Avalanche has appeared to be a standout side throughout the campaign. They ended the regular season with the second-best overall record in the NHL, as they went 56-19-7. Furthermore, they ended with a dominant home record of 32-5-4 at Ball Arena. During the playoffs, they have completed two sweeps, including in the first round against the Nashville Predators. However, it was their sweep in the Western Conference finals that really epitomizes how dominant they have been throughout this season.

The Avalanche looked extremely keen to end the series in game four on Monday evening, as they picked up the 6-5 victory after overtime. Therefore, that avoided any risk that the Oilers could get back into the series by killing any momentum that the hosts were looking to build. Cale Makar was outstanding in game four, as he ended with a goal and four assists. Meanwhile, further goals in the victory were scored by Nathan MacKinnon, Mikko Rantanen, and Gabriel Landeskog.