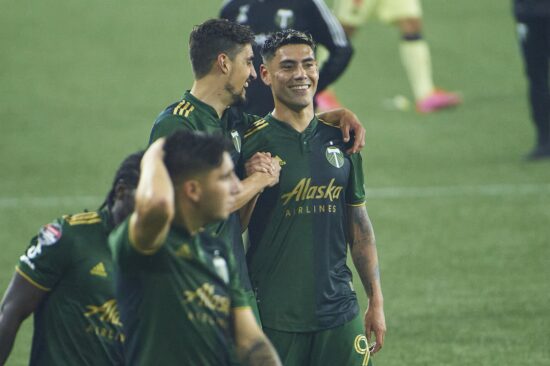 Two more games of the CONCACAF Champions League quarterfinals took place on Wednesday night. Both were in the USA, and both ended in draws.

The Major League Soccer (MLS) champions were behind, then flipped the result before allowing a goal in the third minute of the stoppage time. In the end, the guests from Monterrey went home happier even though they too had an advantage during the game.

After just nine minutes of play, one of the Crew’s defenders, Aboubacar Keita, made a colossal mistake handing the ball to Ake Loba, Monterrey’s forward, without anyone ahead of him. Loba didn’t have any problems beating the goalkeeper Eloy Room.

There wasn’t much to mention in the first half, and the next goal came midway through the second, in the 65th minute. Lucas Zelarayan assisted Milton Valenzuela at the far post of Monterrey’s goal, and the left-back easily placed the ball behind the net.

The hosts began pressuring the opponents from that moment on, dictating the tempo on the field and attacking constantly. Bradley Wright-Phillips’ goal was canceled because of an offside, and after that, Josh Williams struck the crossbar.

Columbus’ prize came three minutes before the end. Zelarayan scored from inside the box, putting an exclamation point on Crew’s 25-minute domination.

The way things developed on the field, many believed that this might be the final result. But it wasn’t. Jose Alvarado stunned the MLS champs in the third minute of the injury time, scoring following Dorlan Pabon’s assist. This was a massive boost for the Mexicans, who have the away-goal advantage before the rematch at home.

Both goals in this match took place in injury time, and both were after penalties, with the sweeter one being Portland’s. The Timbers escaped death in the 97th minute, with Felipe Mora converting the shot from the white spot. The referee awarded the penalty due to the handball in the box during the hosts’ last attack.

Club America reached their goal after Claudio Bravo’s reckless tackle in his own box. Roger Martinez calmly executed the scoring chance, and the guests from Mexico City were up at the break.

After the second 45 minutes began, Portland turned up the pressure, and the hosts had several excellent chances to equalize. Dairon Asprilla was the first to threaten, five minutes into the second sequence. Yimmi Chara and Larrys Mabiala also had their attempts, yet unsuccessful.

Looking overall, this isn’t a bad result for Giovanni Savarese’s team, who appeared without several crucial players. Sebastian Blanco, Jeremy Ebobisse, Jaroslaw Niezgoda, all of them ruled out. Timbers hope to see them ready for the rematch in seven days.