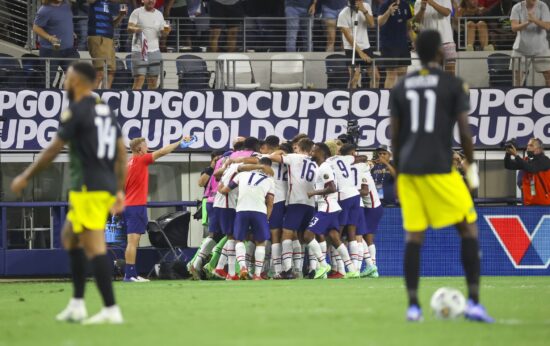 CONCACAF Gold Cup enters its final stages, and now we know all four semifinalists. Team USA defeated Jamaica, much harder than expected, but eventually, they progressed to the next round. The Yanks will meet Qatar in the match for the finals.

With seven minutes to go, the 20-year old forward finally broke the ice, relieving the pressure off of the American team. Cristian Roland crossed from the side, and the fantastic Jamaican goalkeeper, Andre Blake, misjudged the ball’s trajectory, which landed on Hoppe’s head. Schalke 04’s player had no trouble packing the ball inside the net, earning his first goal in just three appearances for the national team.

It was a big moment for him and the US team, who would progress to the competition’s semifinals, their 15th so far.

We might say that the Americans had a lot of luck tonight, especially in the first half when Jamaica played excellent football. The Boyz would most definitely take the lead in that part if it weren’t for Matt Turner, who had several saves.

He was tested by the rivals repeatedly, with the attempt in the 39th minute being the most dangerous one. Junior Flemmings’ ferocious strike was pushed away, and the Americans stayed leveled with Jamaica.

Bobby Reid attacked one minute later, but then again, we saw Turner being successful in action. On the other side, the only shot worth mentioning was Hoppe’s attempt in the 22nd minute.

As time went by, Gregg Berhalter saw that he needed to make certain changes, so he sent Gyasi Zardes and Cristian Roland onto the pitch after one hour of play. These two guys immediately impacted the US game, creating several chances and many problems for the opponents. Eventually, Roland was the one who made the crucial assist.

Overall, the Americans didn’t impress, but they found a way to fight the adversity and come on top. The current team lacks its biggest stars, and this edition of the Gold Cup will be helpful to see which of the present payers will be added to the already existing core.

The Canadian team defeated Costa Rica 2-0 in the other quarterfinals last night, with Stephen Eustaquio in the central role. Pacos de Ferreira’s midfielder scored a goal and assisted for one, pushing his team into the top four.

After 18 minutes of play, Eustaquio set up Junior Hoilett a perfect scoring chance, and Cardiff City’s winger netted without problems. Eustaquio scored himself in the 68th minute.

The Canadians meet Mexico in the next match, and even though they come in as underdogs, the morale is very high in John Herdman’s crew. On the other side, Team USA faces Qatar in their battle for the finals.

Both matches are on Thursday.