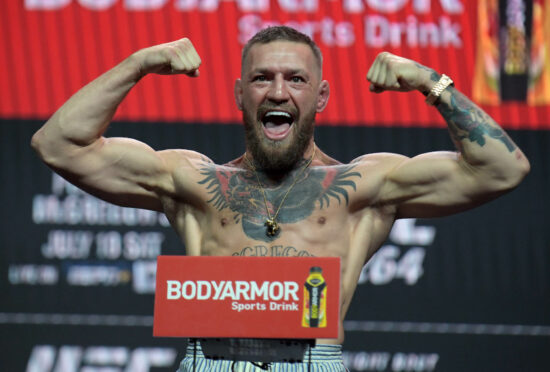 After losing to Dustin Poirier and breaking his fibula, Connor McGregor is spending a lot of time in the gym recovering from that nasty injury. The rehabilitation seems to be going well, and the feisty Irishman has already started making plans for his return.

One name currently stands above all others when discussing that matter – Michael Chandler.

Conor would be an underdog in this bout, with the odds on his win set at +145. Given that he is 1-3 in his last four UFC appearances and is coming off back-to-back losses against Dustin Poirier, plus a terrible injury, that isn’t anything odd.

He added a lot of weight during his absence from the octagon and is now around 180 pounds, meaning that he would have to do some serious cutting. That is probably why he wanted a comeback against Jorge Masvidal in the first place.

Not so long ago, Conor called out Gamebred, but Dana White suggested that the Notorious is too small to challenge Masvidal. In the meantime, he added some serious muscle, and the speculations surrounding his return against Masvidal were overwhelming the media.

However, all that changed when Chandler knocked out Tony Ferguson at the UFC 274. His front-kick KO is one of the best moments of the entire year, and immediately after the fight, Chandler began calling out McGregor for a fight.

The bookies have his win set at -150, meaning he is a solid favorite over the former two-division champion. The 36-year-old stated that he doesn’t mind going up to 170 pounds and that he accepts that as well.

Dana White said that this bout has sense because it would be between No.5 and No.8 in the division, but it isn’t a done deal, and the situation must be further evaluated.

Fight of the Year Material

For many, this would be a fight of the year, as both guys have a similar, very attractive style in the octagon. Both Conor and Chandler have enormous punching power and like to take care of their business on their feet. There is no doubt that the clash would be epic, with lots of hard hits and an open brawl in the middle of the ring.

On top of that, these two guys are showmen, and the entire package would create massive hype.

Also, it would be very lucrative for all the involved sides. Conor is a money-making machine, and the UFC has a huge profit from him. Chandler is also extremely popular in the USA, and the fanbase loves him due to his offensive-minded style. His cut here would be significant as well, and knowing that he is 36, this bout is the last wagon for a big paycheck before retiring. His approach in the octagon is bound to take a toll at some point, and securing a nice sum for the pension is imperative for Chandler.