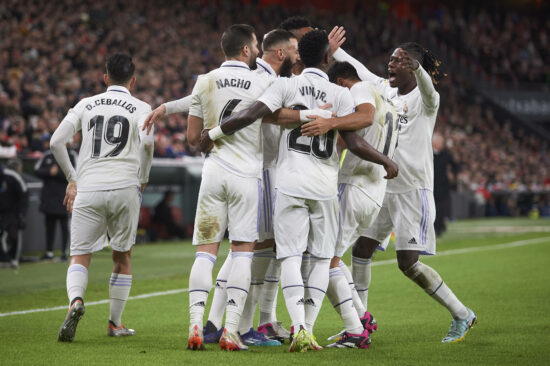 If you’re looking for the latest Copa del Rey predictions and odds for Real Madrid vs Atletico Madrid, look no further than Vegas Odds.

When it comes to Copa del Rey, Los Blancos have 17 wins over Atleti, along with 14 draws, and 11 losses. Oddsmakers think Real Madrid will add an 18th cup win to the list on Thursday. To learn why you should (or shouldn’t) trust them, just keep on reading this prediction piece.

Although both teams are in good form, Los Blancos are in a much better situation ahead of the first Madrid Derby of 2023. First of all, the Copa del Rey game is played on their turf, Estadio Santiago Bernabeu, which is where they’re without a single loss in competitive matches since April.

Sure, Atleti are from the same city, but this doesn’t mean their fans will swarm to Real’s stadium on Thursday. The thing is that Real Madrid management has decided to allocate only 334 tickets to the fans of Atletico Madrid. What this means is that only about 0.41% of all the fans at Santiago Bernabeu will be rooting for Atleti.

In addition to an unfriendly welcome, Diego Simeone’s boys have many other worries on their minds. A thing giving them a major headache is that one of their key midfielder Marcos Llorente will have to miss this game due to an injury.

Real Madrid also have their share of injuries, but there’s some good news for Carlo Ancelotti. The coach will be able to count on one of his crucial defenders in the Copa del Rey quarterfinal. David Alaba is the man we’re talking about, who had to stay off the pitch for two weeks after suffering an injury during a La Liga match against Villarreal earlier this month.

Matches between these two intercity rivals are always incredibly tense. For instance, we saw the refs give a total of 18 yellow cards in the last three Madrid Derbies. That’s six cards per game, which is the number we expect to see on Thursday.

However, in addition to lots of cards, for our prop bet, we’re going back star striker Karim Benzema to get himself on the scoresheet.

We think this is going to be a spectacle worthy of the quarterfinal phase of the Spanish Copa del Rey. The game is going to be a real thriller with plenty of goal chances on both ends. Still, we do think Real Madrid are the better side, which is why our vote goes their way.