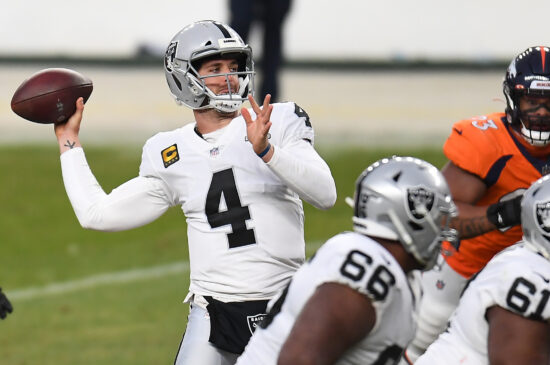 We can all be pretty sure that Tom Brady will be pleased with his choice to sign for the Tampa Bay Buccaneers after winning another Super Bowl last year. Despite that, there was a ton of speculation about where he could’ve gone after he left the Patriots, and this video clip made everybody wonder who he was talking about:

Brady was clearly the most coveted QB in the league last summer as he could turn anybody into a championship contender, but he was always going to be expensive and there have been doubts over his ability to do it away from Foxboro.

The Las Vegas Raiders find themselves stuck in quarterback purgatory with Derek Carr – He’s dangerously close to average and he’ll usually play well and give you a chance to win, but when the game is on his shoulders there’s always a feeling that he’ll let you down when it matters most.

It’s shown in his stats as he’s usually pushing towards 4000 passing yards a season, he’ll get close to 20 TDs and his INT numbers don’t usually go into double figures.

Fumbles are one of the biggest problems as he had 11 last season and 8 of those were lost, while he’s only ever had one winning season in his 7 years as a starter so eventually you have to wonder if he would be the problem.

If it’s as black and white as the Raiders choosing to stick with him over Brady then it looks like a poor move, and that’s what the latest rumors seem to be suggesting:

Sticking with Carr is the long term option as he’ll usually keep you close to .500 and that eliminates the chance of taking the top QBs in the draft, and what a story it would’ve been if the Raiders had kicked off live in Vegas with Tom Brady.

The Bucs can be found at +600 to win the title again as the second favorites behind Kansas City, while Vegas are a massive +5000 so that doesn’t look possible with Carr under center.