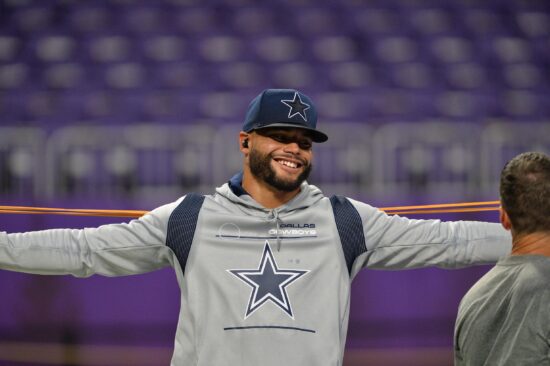 This is going to be one very interesting matchup between two NFC East foes. The Cowboys aim to win and reach the No.2 seed in the NFC, potentially giving them home-court advantage in two playoff matches.

Meanwhile, the Eagles are in the playoffs, shutting down all the critics. This is a massive plus Jalen Hurts, but also for the franchise from Philly, who now has a solid basis for the future.

This is a million-dollar question. They are in the playoffs and have a chance to reach the second spot in the NFC. However, the prospects for that are very low. If they lose against the Eagles, they will most probably meet them in the Wild Card round, unless Arizona loses to the 49ers at home. But enough with the combination and possible outcomes.

On Sunday, the Cowboys lost to the Arizona Cardinals, which we didn’t expect to see. The final result was 25-22 for the Cards, who had the lead throughout most of the meeting. Prescott was at the high level, throwing for 226 yards and three touchdowns, but did have one lost fumble.

Running back failed to show up, as Ezekiel Elliot and Tony Pollard combined for miserable 25 yards on 12 carries. Prescott was the team’s leader in rushing yards with 20 on five scrambles. This was the difference-maker in Arlington and something Mike McCarthy needs to take care of in the shortest possible time.

Philly woke up in the best possible moment, posting four wins in a row and moving up in the standings. As a reward, they clinched the playoff spot one game before the end of the campaign. We need to say that the schedule was working in their favor, as they met with the Jets, Washington twice, and the Giants.

The latest win came on the road in DC, 20-16. It was a very tough contest for Hurts and the boys, who were behind until the final period. That was when Jake Elliot flipped the result with two field goals. Boston Scott ran for just 47 yards, but he had two touchdowns on the ground, executing superbly in the red zone.

Hurts threw for 214 passes, without touchdowns or picks, and he also rad for 44 yards on seven scrambles. Overall, Philly posted 118 rushing yards.

Head to Head Games – Dallas Routine in the First Game

The Cowboys face the Eagles early into the season, beating them 41-21. Prescott threw for three TDs while Elliot ran for two more.

We have to come back to the start of the article when we asked ourselves will Dallas play with 100% in the first place. Something tells us that they won’t. It is much safer for them to take a break here and pick Philly in the Wild Card round than to risk injuries or something like that. Therefore, we back up the hosts to win this one.