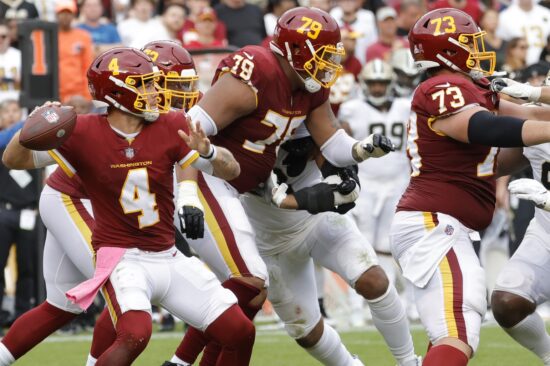 Dak Prescott and his team suffered some inexplicable losses, which could cost them dearly in the end. They now have to win in DC to stay in the race for the NFC’s top seed.

As for Washinton, the Football Team is at the .500-mark, and each win from now on is worth pure gold for Ron Rivera’s unit.

Defense Needs to be Better

The Cowboys are allowing too many yards from the scrimmage per game, 388.4, which is, for example, more than the Football Team does. At some point, even Prescott and the offense can’t cover that. And may we add, that we saw them struggling in some situations this season.

Even though Dak began the season pretty strong, being one of the NFL MVP candidates, as time went by, he and the rest of the crew from the attack showed some signs of inconsistency. For instance, they scored nine points against the Chiefs, with Prescott throwing two picks and being sacked five times.

Luckily against the Saints, there weren’t such glitches involved, but the offense wasn’t that shinny at all. Meanwhile, the offense had four picks on Taysom Hill, with Carlos Watkins delivering the ball all the way back.

One by one, the Football Team defeated Buccaneers, the Panthers, the Seahawks, and finally the Raiders. All of these games were pretty tight, particularly the latter two, who ended with the same result, 17-15.

To make it even more significant, the Football Team won these events without its top star, Chase Young, who ended the season picking up an injury against the Buccaneers. WFT won in Las Vegas with Brian Johnson nailing a 48-yard FG with 37 seconds to go.

Rivera didn’t have running back JD McKissic in this one, but his team won anyway. Antonio Gibson had 111 yards from the scrimmage for one receiving TD, Logan Thomas added one as well. As usual, the defense was at a high level, making stops when needed the most.

The NFC East division foes have a long history. But we are just going to mention last year’s events. WFT won in both, 25-3 at home and 41-16 in Dallas.

The Cowboys are unstable, and even though they sit first in the NFC East, we don’t trust them too much. Meanwhile, the Football Team is avoiding the hype and plays solid. There isn’t any beauty in their performances, nor some spectacular highlights, but the result is there. That is Ron Rivera’s signature. We would go with the hosts protecting a four-point spread in this one. Like all of Washington’s games, we expect this one to be tight as well.