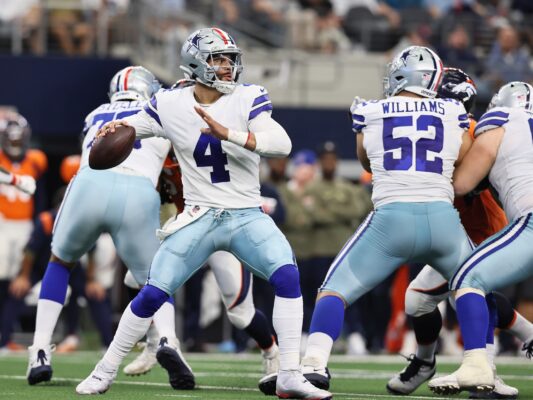 After slowing down, the Cowboys are heating up again, intending to stay like that until the end of the regular part of the season. The schedule isn’t very smooth, but they are still pushing well.

The Giants, on the other side, are out of the NFC playoff picture but have a big motive to take down the great rivals and complicate their position.

Dallas On the Road Again

The Cowboys will play their third consecutive road game in New York. The previous two ended in their favor, triumphing in New Orleans vs Saints, and in DC against the Football Team. Mike McCarthy’s unit is now after the third straight victory, which would pretty much secure the NFC East title.

Dallas was up 24-0 at halftime in Washington, looking unstoppable and ferocious. But like so many times before, they would commit several mistakes, slow down and allow the hosts to come to within one possession. In the end, it was 27-20 for the Cowboys, who saved their skin in the last couple of minutes.

Dak had 211 yards with a TD and two picks. That sole scoring pass went to Amari Cooper, while Dorance Armstrong delivered the other one, returning a fumble for 37 yards.

Jones Out, Giants Without a Chance

Daniel Jones is still recovering from his neck injury, visiting doctors across the Big Apple. It appears that he won’t be coming back for this game, and if the Giants are smart enough, they will keep him away from the field until the rest of the season. Why risk the starting QB in events that have no competitive motive.

NYG had a nasty schedule with three of the previous four games on the road and losing all of them. The most recent one was in LA, where Chargers posted a 37-21 triumph over the guests who had Mike Glennon as the starting QB. He performed well with 191 yards, two touchdown passes, and one interception. Glennon would also run for one more score.

The Giants rushing defense wasn’t up to the task, allowing Chargers 152 yards on the ground. Though the hosts had 37 carries, focusing on breaking the rivals in this area of play.

The Cowboys were victorious at home, beating the Giants 44-20. Overall, they have eight wins in the past nine events against the Giants.

The Cowboys are coming to New York to execute a seasonal sweep over the Giants, who are in a very bad position. With all due respect to all those available players on their roster, they simply don’t stand any chances against Dak and his crew. No need to overthink in this case; the guests will win.