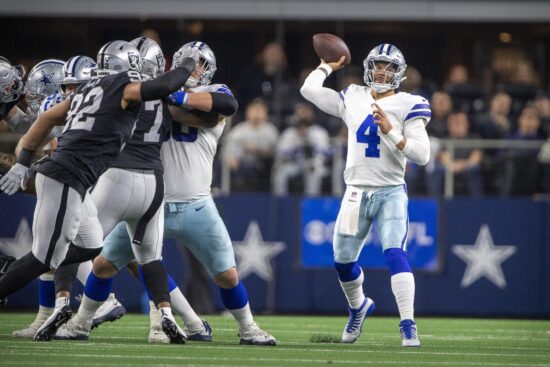 Both teams lost on Thanksgiving. The New Orleans Saints lost to the Buffalo Bills 31-6, which was expected. What wasn’t expected is that the Dallas Cowboys were going to lose to the Las Vegas Raiders 36-33 (in overtime).

Despite losing, both teams still have every right to dream of the playoffs. The Cowboys are 7-4 on the season and are at the top of the NFC East. The Saints’ record is 5-6, which puts them in second place in the NFC South, but they still have a decent chance to get a Wild Card berth.

Dallas’ WRs Lamb and Cooper to Return in Week 13

Dallas was a 7-point favorite on Thanksgiving but ended up losing to Las Vegas. Their defense had a bad day, conceding 36 points – the highest this season.

Unfortunately for the Cowboys, their offense wasn’t much better either. Their quarterback, though, did a fine job last Thursday. Dak Prescott threw 32/47 for 375 yards and two touchdowns, without a single interception. Those two touchdown throws were caught by two tight ends – Dalton Schultz and Sean McKeon.

The obvious question is where were Dallas’ receivers that day? Well, two of the Cowboys’ best WRs were out of the game. CeeDee Lamb, who’s their leader both in receiving yards and receiving touchdowns was still recovering from a concussion.

Amari Cooper, on the other hand, was out due to COVID-19 protocols. The same was the reason why he had to skip the Kansas City Chiefs game in Week 10, which his team lost 19-9.

The good news is that both of them are likely to return in Week 13, which means that the Saints defense could be in trouble.

It’s not an overstatement to say that November has been a horrible month for the Saints. They lost all four games they played this month, with a score differential of 81-121. This shows that nothing’s been working properly in New Orleans.

Their offensive problems can be explained by the fact that they’ve been missing a couple of crucial players. The Saints’ strongest offensive weapon – running back Alvin Kamara – missed three consecutive games and is uncertain for the Week 13 clash with the Cowboys.

Even if Kamara returns, he probably isn’t going to be at his best, meaning that Mark Ingram will probably have to spend significant time on the field. Unfortunately for the Saints, Ingram too has been having some fitness problems. As if that wasn’t enough, New Orleans’ All-Pro offensive tackle Ryan Ramczyk also has some fitness issues.

Now that you know why the Saints’ offense hasn’t been working well, you’re probably wondering what’s going on with their defense. The answer to this could be that they’ve faced some deadly offenses this month. The bad news is that the same will be the case in Week 13 when they’re taking on the NFL’s third-best offense – Dallas is averaging 29.6 points in 2021.

Neither team will be lacking any motivation, which means that the player quality will probably be the decisive factor on Thursday night. At the moment, the Cowboys’ players look superior to those wearing black-and-gold jerseys.