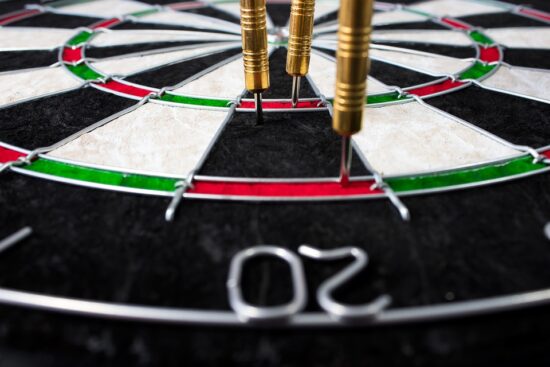 For many sports fans, it isn’t really the festive period until the darts get underway. The PDC World Darts Championship is the peak of the sport, and the action at Alexandra Palace finally gets underway on Wednesday, December 14. Below, you can find out more about the history of the event, as well as the latest Vegas odds to win the PDC World Championships 2023.

The PDC World Championships is the highest accolade on the darts calendar and forms one leg of the illustrious Triple Crown of Darts. It was first competed in 1994. The Sid Waddell Trophy is awarded to the winner, with the accolade named after former commentator Sid Waddell, who passed away in 2012.

Since the tournament’s introduction to the world of darts, there have been ten different players to have won the prestigious honor.

The most successful player in the history of the Grand Slam event remains Phil Taylor, who won 14 times from 25 appearances. Other multiple winners of the PDC World Championships include Adrian Lewis, Gary Anderson, Michael Van Gerwen, and Peter Wright.

There is a very familiar name at the top of the betting to win the event in 2023, as Michael Van Gerwen looks to get his hands on the prestigious honor for the fourth time. The Dutchman last won the PDC World Championship in 2019 but was also a beaten finalist in the 2020 final. Only Phil Taylor has reached more finals throughout his career than the Dutchman.

Reigning champions haven’t fared well since Gary Anderson’s second win in 2016, but Peter Wright certainly looks a standout choice in the betting. The Scotsman won his second title with a 7-5 victory over Michael Smith last year. Gary Anderson is also a massive price in the betting at this stage, as he has reached the final on four occasions since 2015, winning on two occasions.

Many of the top players in the betting have leading chances coming into the big tournament to kick off the new calendar year. However, I really like the chances of Welsh star Gerwyn Price. He won the event in 2021 with a 7-3 victory over Gary Anderson, and he is currently the top-ranked player in darts.