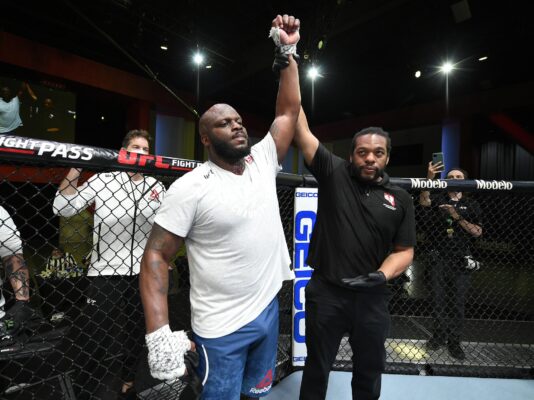 Derrick Lewis has defeated Curtis Blaydes tonight at the UFC Fight Night 185, making one of the biggest upsets in the heavyweight division over the past few years.

At 1:26 inside the second round, Derrick Lewis hit his rival with a ferocious uppercut. Blaydes immediately fell on the ground, while the Black Beast added a few more punches to his chin while lying helplessly on the floor.

There are some controversies about whether those punches needed to be thrown or not, but anyway, the former title challenger didn’t do anything we didn’t see previously in the octagon.

Blaydes tried to attack Lewis, perfectly setting up a position for the rival to hit him with a right uppercut. A second later, he was on his back, and Lewis struck him twice more before the referee in the ring could have stopped the match.

This win moves him up not only in the division standings, but various categories. Lewis now has the most KOs in the UFC history, along with the Brazilian legend, Vitor Belfort -12. With 16 wins in the heavyweight division, he is tied second with Frank Mir, behind Andrei Arlovski, who has three more.

Judging by the way he performs, Lewis will most definitely improve his numbers here.

Blaydes Not Doing His Thing

The guy who has 59 takedowns in career, the most in the UFC heavyweight history, had just one attempt to bring the opponent down to the canvas. For some unknown reason, Razor decided to run away from his style of fight and go to Lewis terrain. Which is why he suffered another devastating knockout.

Though, it needs to be said that Blaydes performed well in the first round and that the judges scored that round in his favor. He was controlling the rhythm of the fight and was slowly chopping Lewis’ lead leg.

It seems that Razor still isn’t ready for the big challenges and that his tactics, as well as overall quality, need to be severely improved.

What Is Next for Lewis?

The Black Beast stated that he wants to fight Alistair Overeem following the fight. Of all the fighters available, he wants the legendary Dutchman who recently lost to Alexander Volkov.

Even though this is odd for most of the fans, it seems that there is some logic in Lewis’ plans. He knows that there isn’t a chance for him to challenge the winner of Miocic vs. Ngannou spectacle, as Jon Jones awaits the better from that one.

UFC wants to make one of the biggest spectacles ever with this fight, and Lewis has virtually no chances to interfere here. On the other side, he wants to keep his challenger status against the declining Overeem, who can’t compete on the highest level anymore, but is still a sounding name. So it is the best possible situation for Lewis, whose thinking in this situation is much deeper than many think.