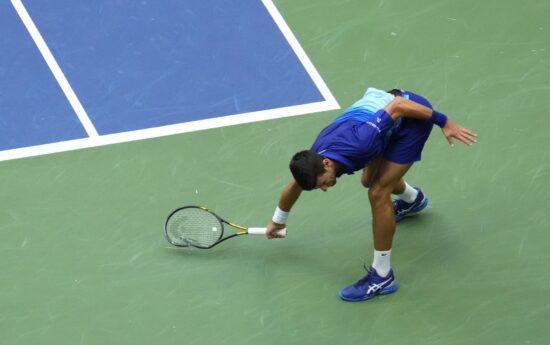 The world number 1 Novak Djokovic is down to a 50% win percentage in 2022 following the loss in Round 1 of ATP Monte Carlo. It was his first match played on the clay court, which was supposed to serve as a rehearsal for the 2022 French Open, which uses the same kind of surface.

At Roland Garros, Djokovic will be defending the 2,000 ranking points that he won by defeating Rafael Nadal in last year’s final. If he fails to do well in this year’s tournament, we could see him lose his spot at the top of the ATP Rankings.

On Tuesday, April 12, Novak Djokovic suffered his second defeat of the season. It happened against the ATP #46 Alejandro Davidovich Fokina in the first round of the 2022 ATP Monte Carlo.

Even though he was seen as a huge favorite to win the Masters 1000 event, Novak failed miserably. He lost to a +700 underdog in three sets, with the last one being an absolute disaster – Fokina beat him 6-1 in games.

So, what happened? According to the man himself, he “collapsed physically” in the final set, suggesting that he’s totally out of shape. That’s actually not much of a surprise knowing that he’s played only four matches this year.

As a reminder, Djokovic got booted out of Australia for not being vaxxed. As a result, he couldn’t defend his Australian Open title. The same reason was why he miss the Sunshine Double – the Miami Open and Indian Wells.

The result was that’s taken part in only two tournaments since the start of the year. And he failed in both of them! Before losing in Monaco, Djokovic lost in the UAE. At the ATP Dubai in February, Jiri Vesely stopped him in the third round, beating the Serbian in straight sets.

When the French Open odds were first released, Novak Djokovic was the second favorite (behind Rafa Nadal). His odds were somewhere in the range of +200.

However, things have changed since. After losing at the ATP Monte Carlo, Novak’s odds of retaining the French Open title drifted to +250 at many tennis betting sites.

The probable reason why the French Open odds on Djokovic aren’t even longer is that his main competitors are struggling as well.

Tennis Elite Struggling Ahead of the 2022 French Open

Djokovic is completely out of form, which could be a major problem for the world no. 1 as we’re only six weeks away from the 2022 French Open. A thing going in his favor is that his main rivals are having problems on their own.

Daniil Medvedev, for instance, will miss the French Open due to hernia surgery. What this means is that he won’t be able to throw Djokovic off the ATP throne. As Medvedev is the only player within reach of Djokovic, the Serbian player won’t have to stress too much at Roland Garros.

He’s not going to lose his #1 spot in the ATP Rankings, but there’s a battle he could lose if he fails in May. What I’m talking about is the battle for the GOAT status he’s leading with Rafa Nadal.

After winning the Aussie Open, Nadal now has the advantage over Djokovic in terms of Grand Salm wins. He’s got 21 titles in his collection, which is one more than Djokovic (and Federer). If he wins another one – at his favorite tournament – Novak might not be able to catch up with him ever.

The trouble is that the same as Djokovic and Medvedev, Nadal too has some physical issues. After suffering a rib fracture at the Indian Wells, Nadal was forced to miss the next couple of tournaments. In fact, he still hasn’t returned but is expected to do so before the end of the month. The only question is whether the absence will impact his form?