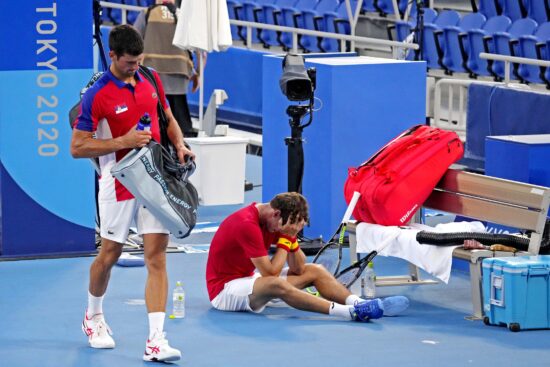 The Olympics turned out to be one big nightmare for the world’s No.1 Novak Djokovic, who didn’t win a single medal, even reaching the semis in two competitions. After experiencing two defeats yesterday, the Serb had another disappointing day this Saturday.

After simply disappearing in the second set of the match against Alexander Zverev yesterday, Djokovic was struggling throughout the entire contest today, eventually losing to Carreno Busta 4-6, 7-6, 3-6.

We saw Novak unable to respond to Carreno Busta’s solid serve and, above all, soft in the rallies that often saw the Spaniard coming on top. The frustration of the world’s top player was so high that he threw the racquet in the stands in one situation, then broke the other one, trashing the pilon which holds the net.

We often saw Djokovic in such a mood, but today was a bit different, as it was a clear display of the Serb’s weakness.

On the other side, Carreno Busta was more than ready to play, and he slowly began pumping up the tempo, not allowing Novak to impose his style of play. What is astonishing data is that the Spaniard didn’t allow a single break point conversion, as Novak wasted all of his six chances for taking the rival’s serve.

All in all, the result is not surprising when looking at the overall picture, and we can say that Carreno Busta earned a victory. This is his biggest success in his career, while on the other side, Djokovic suffered one of the toughest setbacks.

The Serbian came to Tokyo to win the gold and chase the Golden Slam, the first-ever in the men’s competition. He comes back home with a bitter taste in his mouth, emphasized by withdrawing from the bronze medal match in mixed doubles. Novak was supposed to play with Nina Stojanovic against the Australian pair, Barty/Pierce, but the Serbian picked up a shoulder injury which prevented him from appearing.

The Ukrainian player defeated Elena Rybakina after three sets and a memorable comeback. Spirulina lost the opening part of the match, 1-6, but after that took two sets in a row, 7-6 and 6-4, to grab the biggest achievement in his career.

The sixth player in the world had to endure a match that lasted for two and a half hours, going back and forth with the Kazakh, who was playing very well.

Rybakina had a 4-1 lead in the third set and was on the verge of breaking the rival’s resistance but stopped in the worst possible moment.

The singles finals in both competitions are set for tomorrow. Belinda Bencic and Marketa Vondrousova feature in the ladies’ part of the competition, while Alexandar Zverev and Karen Khachanov face each other in the men’s competition finals.