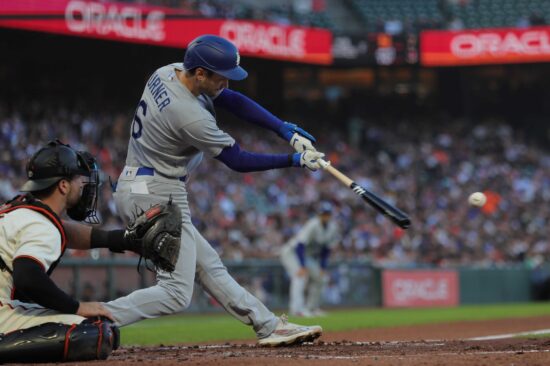 There were some who thought the San Francisco Giants could be sellers on Tuesday’s trade deadline as they are 19.5 back from the Los Angeles Dodgers in the NL West and 8 behind the reloaded Padres. Instead SF held on to Carlos Rodon and other pieces while trading the Mets Darin Ruf for J.D. Davis.

L.A. also made a move on Tuesday acquiring Joey Gallo from the Yankees. Gallo has struggled this year, but has power and could greatly benefit from a change of scenery away from New York. Adding more offense to a Dodgers team that has scored 7, 8, and 9 runs on their current win streak is scary. Los Angeles is a -176 favorite in Wednesday night’s Vegas odds.

Dodgers Have a Bullseye

Whether the Padres are going to try and make up the 11.5 game deficit they face in the NL West or are just trying to load up for the wild card, either way San Diego is now stacked. The Padres have acquired Juan Soto and Josh Bell as well as arguably the best closer in baseball in Josh Hader so Los Angeles can no longer coast to the 2022 regular season finish line.

Make no mistake, L.A. is still in a pretty good spot. They’ve won six of their last seven and just finished up a 21-5 July. The Dodgers have rattled off 17 runs through their first two games with the Giants, with Freddie Freeman having three hits on Monday and Mookie Betts following that up with a trifecta on Tuesday. Trea Turner, Max Muncy, and Betts have all hit HRs the last two games.

Los Angeles swept the Giants in four games at Dodger Stadium right out of the All-Star break, and they are on the path to repeat that, this time in the Bay. Julio Urias (10-6, 2.71 ERA) started one of those recent wins over San Francisco, throwing six shutout innings as the Dodgers came out on top 4-2. Urias has allowed an ER or less in three of his last four overall and has just 1.00 ERA vs. the Giants in three starts this year.

San Francisco has dropped six straight to the Dodgers even after sweeping them over a three game series at Oracle Park on June 10th-12th. Any hopes at a second consecutive NL West crown are out the window for the Giants with the Dodgers and Padres being absolutely loaded for the home stretch, but San Francisco is just 4.5 back from the third wild card spot if they can go on a run.

The Giants have been outhit 24-12 so far this series, something that probably won’t improve against Urias. San Francisco has scored just two runs in 18 innings against the Dodger starter this season and have a collective .085 average against Urias. The Giants are just 2-6 their last 8 against LH starters.

Los Angeles will be playing with a heavy heart on Wednesday night as Hall-of-Fame broadcaster Vin Scully passed away on Tuesday night. The Dodgers of course will also be playing inspired, and with the way Urias has dominated San Francisco this season they should be able to pull away with a seventh straight victory over the Giants.