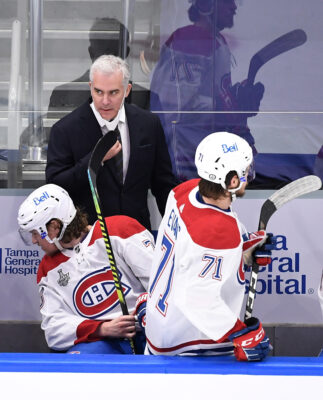 It may not have been the end to the season that Montreal Canadien fans would have been hoping for, as the Habs were beaten in the Stanley Cup finals by the Tampa Bay Lightning. However, that shouldn’t take away from how impressive they were during the playoffs to reach the finals for the first time since 1993. The performances of two of the stars at the forefront of that target being achieved have now been awarded new deals, as confirmed by Habs general manager Marc Bergevin.

It shouldn’t be too big of a surprise that Dominique Ducharme has been rewarded for his efforts as an interim coach by being awarded a three-year deal with the franchise. Ducharme has been a prominent figure in the progression shown by the Canadiens over the past couple of years, as he had previously served as the assistant coach before being appointed interim coach at the end of February. He served as the assistant coach for two years under the stewardship of Claude Julien.

However, the Habs certainly reached unlikely levels under the interim coach in the second half of the season, as they secured a playoff finish. Furthermore, he was the coach that led the Habs to their first Stanley Cup finals since 1993.

During his time as interim coach, the Canadiens had a record of 15-16-7. Montreal certainly had undoubted character throughout their playoff run, as they came back from a 3-1 deficit to beat the Toronto Maple Leafs in the opening round, before achieving a sweep in the next round against the Winnipeg Jets.

Ducharme had been with the Habs since 2018, and has also led the Canadian junior team to gold and silver medals during his coaching career. However, the Habs weren’t done with tying down members of the coaching set up this week, as it was also revealed by Marc Bergevin that the franchise had also agreed on a new deal with assistant coach Luke Richardson. Richardson has been with the Habs since 2018, and has extensive experience in the NHL, having been in the league for the previous 25 years.

During his time in the NHL, he has also served as the assistant coach for the New York Islanders and Ottawa Senators. Richardson was also called upon during the post-season this past season, as he was forced into the role as head coach for a game in the playoffs against the Vegas Golden Knights after Ducharme missed game three onwards due to health problems.

Richardson and Ducharme seem to have an excellent working relationship, and that was evident throughout the NHL season this past year. However, Habs fans will be hoping that this was just a sign of things to come, as they will be looking for back-to-back Stanley Cup finals appearances in 2021-22.