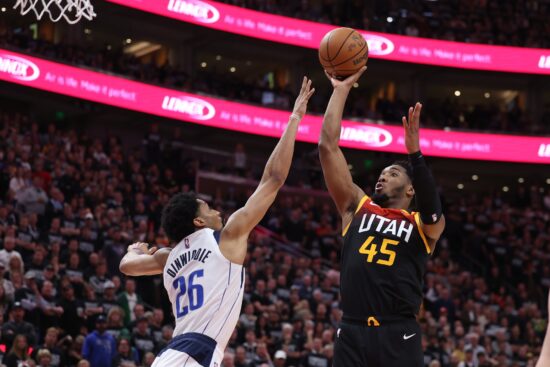 Adrian Wojnarowski threw a bomb last night, revealing that the Utah Jazz is now listening to offers from other teams regarding Donovan Mitchell’s trade. It is something that many didn’t see coming.

Utah Jazz recently traded the All-Star center and one of the most dominant defensive players in history, Rudy Gobert, to the Minnesota Timberwolves. That was a shocker and a surprise that arguably shifted the balance in the West. The Frenchman was one of the pivotal players in Utah and the team leader along with Mitchell.

A few days later, we have this news, which involves Mitchell, suggesting that the Jazzers might be heading towards a rebuild.

They are still the top favorites for having Mitchell next year, -125, but they were in the same position with Gobert before his trade.

The Miami Heat are the No.1 regarding the guard’s next destinations. Erik Spoelstra’s crew is +400 to land Mitchell, as they have enough cap space for his contract and, more importantly, enough assets to make the trade.

Though, some suggest that he wouldn’t fit the Heat’s roster, due to his mediocre defense and ball-handling style of play.

The New York Knicks are +475 to land Spida. They are desperate to have at least one superstar on the roster. The franchise from the Big Apple made some moves during the free agency, strengthening the unit and indicating that they want to play a significant role in the Eastern Conference and become a playoff team.

Boston Celtics are in the mix as well, with the odds of +750 for Mitchell’s services. The East champions need one more player to take a step forward and grab the Larry O’Brien trophy. Mitchell would be OK for this roster because he could replace Jayson Tatum in the crucial moments, as we saw that JT wasn’t very good in the Finals with the game on the line.

Ever since he entered the league as the 13th overall pick in the 2017 NBA Draft, Mitchell has been one of the best players. He was the main reason for the Jazzers’ sharp rise in the West, along with the head coach, Quin Snyder.

He missed the Rookie of the Year Award to Ben Simmons but got into the center of the media attention because of a fantastic contribution on the field. Spida also won the NBA Slam Dunk contest in his rookie year and later went on to earn three consecutive All-Star invitations.

In 345 regular-season appearances, Mitchell averaged 23.9 points, 4.5 assists, and 4.2 boards, while shooting .441% from the field. His numbers in the playoffs are even higher, with 28.3 points in 39 postseason appearances.