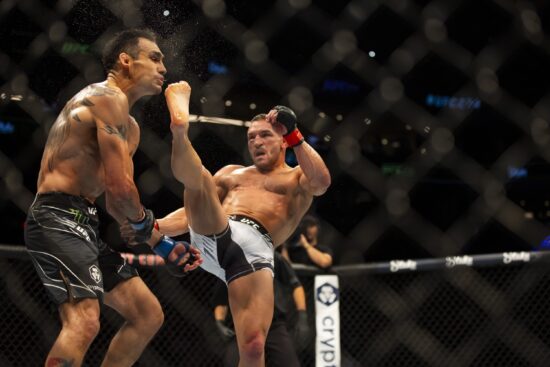 It looks like fans will get to give thanks for a great fight as Ariel Helwani has announced on the MMA Hour that all indications point to Dustin Poirier and Michael Chandler headlining UFC 281 in November at Madison Square Garden. The two had shown some bad blood recently at UFC 276, with Poirier getting verbal with Chandler as each fighter was taking their seats in the stands.

The announcement of the fight isn’t a total surprise with Poirier being #2 in the lightweight rankings and Chandler #4, but Poirier also shared a picture of himself looking more bulked up in January as he had announced plans to move up to 170 and fight in the welterweight division.

Long Time Off for The Diamond

The proposed fight in November gives Poirier plenty of time to work back down to lightweight, and it will also be his first bout in nearly a year as he honored his word to fight less frequently in the future following a submission loss in the second round during a title fight with Charles Oliveira at UFC 269.

Poirier obviously has some unfinished business in the lightweight division, never being the undisputed champion. Poirier beat Max Holloway for the interim belt in 2019 but lost his next fight via submission to Khabib Nurmagomedov in the main event of UFC 242.

Chandler Ready for His Move

A Poirier vs Chandler bout would be great because they both have something in common. Much like Poirier, Chandler had his dreams of an undisputed lightweight championship spoiled by Oliveira too, getting knocked out 0:16 into the second round at UFC 262 in his first and only career title fight.

To his credit, Chandler has bounced back tremendously from the Oliveira loss. Sure he took a second straight defeat in a decision against Justin Gaethje at UFC 268 in November of 2021 but that was also named “Fight of the Year.” Most recently Chandler may have had “Knockout of the Year” when he obliterated Tony Ferguson with a front kick at UFC 274 in May for a TKO win.