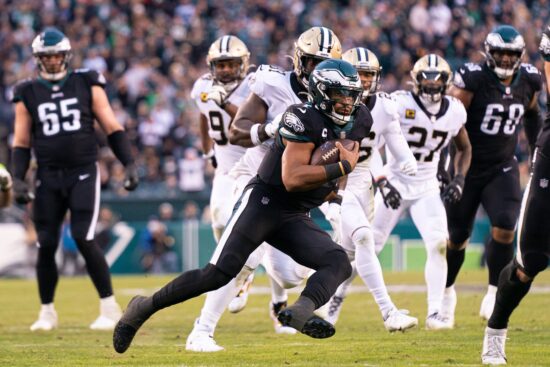 Two NFC East rivals meet on Sunday afternoon in a Week 12 clash. The New York Giants (3-7) welcome the Philadelphia Eagles (5-6) at MetLife Stadium. The Giants are looking for their third straight home win, but doing that isn’t going to be easy as the Eagles are playing superb football lately.

They’re coming off back-to-back wins in which we saw them scoring 70 points. Vegas odds suggest the Eagles will win again, which could give a massive boost to their playoff efforts.

The Eagles are 5-6 on the season, with two of those wins happening in the previous two weeks. Not only did they win two straight games but they did it in style. In Week 10, they beat the Denver Broncos 30-13 on the road; a week later, they won against the New Orleans Saints 40-29 at the Linc.

Philadelphia’s sophomore quarterback Jalen Hurts has started improving his passing game. We did see him getting sacked on a few occasions, but he seems to have started clicking with rookie wide receiver DeVonta Smith.

Despite that, Philly’s passing hasn’t been great. However, the Eagles have been sensational when carrying the ball. In fact, with 1.5 rushing TDs per game, they’re among the best teams in the league. Further, in terms of rushing yards, with 153.4 per game, they have the second-best average in the NFL.

Quarterback Hurts is their best rusher, with eight rushing TDs to his name so far. In addition, three of their running backs – Jordan Howard, Boston Scott, and Kenneth Gainwell – each scored three touchdowns so far.

The Giants have scored 189 points in the ten games they’ve played so far in 2021. That makes their offense one of the worst in the league. To deal with the issue, the Giants decided to fire offensive coordinator Jason Garrett.

Still, that probably isn’t going to solve their problems straight away. Speaking of problems, their biggest issue is that they seem to have only one offensive weapon – passing.

Their rushing game has been horrible this season. With just 0.7 rushing touchdowns per game, the Giants are among the least productive teams in the league in this aspect. No surprise there as their best RB Saquon Barkley is struggling with an ankle injury.

The Giant’s passing game has been okay in recent weeks. Their quarterback Daniel Jones made at least one passing touchdown in each of his previous four games. The trouble is that Jones might not have his favorite targets to throw the ball to in Week 12.

The thing is that two of the Giants’ leaders in receiving yards – Kadarius Toney and Sterling Shepard – are having problems with a thigh injury.

The Eagles have a very good chance to get to the playoffs but for that to happen, they need to continue winning. Luckily for them, in Week 12, they’re locking horns with one of the worst teams in the NFC.