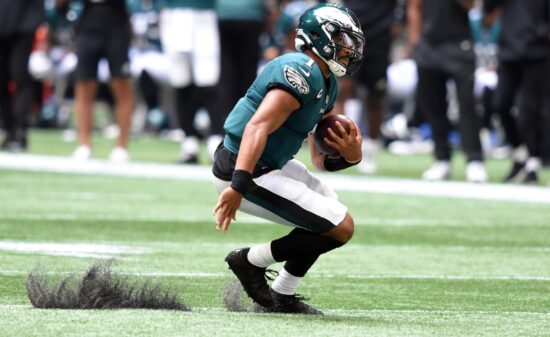 The NFC East division rivalry between the Eagles and the Football Team was always pretty intense. These two franchises dislike one another, which always spices up their contests. This time, the guests will need a win to stay in the playoff picture, and we are sure that the WFT will do everything in its power to prevent that.

In the last matchup between these two sides, Jalen Hurts was the focal point of the Eagles’ game. The pressure is much higher now than before, and this is a perfect opportunity to see how the young QB behaves in these situations.

His Eagles have three wins in a row, against the Jets, Washington, and the Giants, the latest one being 34-10. Hurts was rational, with 199 passing yards for two TDs, and nine scrambles for 37 rushing yards. The Eagles’ ground game was very good, as they racked up 130 yards.

Devonta Smith showed his quality on the offense, catching five passes for 80 yards and a TD. Lane Johnson had Hurts’ second TD toss, while Alex Singleton posted a pick-six, returning the football for 29 yards.

The team from DC was in the playoff hunt a few weeks ago, but three defeats in a row ended their postseason dreams. At first, they lost at home to the Super Bowl candidates, Dallas Cowboys, 27-20, then against Philly on the road, 27-17, before suffering one of the nastiest losses in the past few years, to the Cowboys in Arlington, 56-14.

Everything was already over after the opening quarter, in which the Cowboys scored three touchdowns. After that, it was only a matter of how inspired are Dallas’ players, and they were quite a lot.

Taylor Heinicke had 121 passing yards for one TD and two picks, and the head coach Ron Rivera decided to bench him and bring in Kyle Allen, who was solid, completing 8 of his 10 passes for 67 yards and a TD. The defense didn’t exist at all, which is obvious when looking at the final result.

As said, the first clash in Philly ended 27-17 for the hosts, with Jalen Hurts dominating. He had three TDs, one through the air, and two on the ground. RB Miles Sanders destroyed the WFT with 131 rushing yards, and in total, the hosts had 238.

If there is a game the Eagles need to win, this would be the one. Their motive is massive, and even if it weren’t for the difference in form and quality between them and the hosts, we would still go with their victory. The running game is the key, as Philly currently plays excellent on the ground.