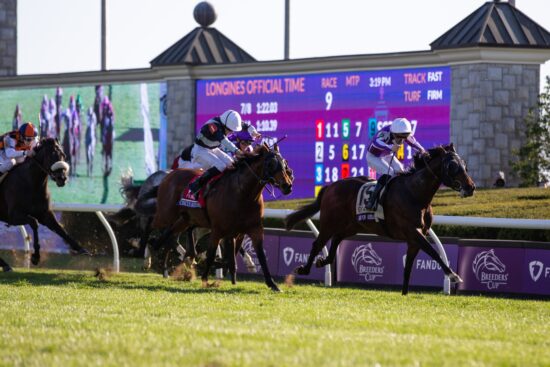 The fastest horses in the world on turf will be on full display at the Breeders’ Cup in November at Del Mar, as the Turf Sprint is one of the many big races taking place on Saturday, 6th November. But, could there be early value in the market before the official declarations are made?

Golden Pal is the current favorite in the betting for the Turf Sprint, having impressed on all starts in the United States. The three-year-old is yet to reappear since finishing a distant seventh in the G1 Nunthorpe Stakes at York, but had won two prestigious graded races before that run.

He was the winner of the Breeders’ Cup Juvenile Turf last season, and started the campaign with a win in the G3 Quick Call Stakes. His pace certainly makes him a leading contender for Ward, who is looking for a first win in this race.

It could be challenging to look away from the defending champion. Glass Slippers was a very impressive winner of the Turf Sprint at Keeneland last year, winning by half a length from Wet Your Whistle.

However, she is without a win in two starts so far this year. She was third, behind Suesa in the G2 King George Qatar Stakes, before finishing third again in the G1 Flying Five Stakes at The Curragh. That most recent showing was a much-improved effort, and she remains a contender that should be respected.

Suesa could have an outstanding chance at the Breeders’ Cup later in the year, having impressed on all starts this year since joining the Francois Rohaut yard. She is three from five this season, with her British win coming in the G2 King George Qatar Stakes at Goodwood.

On that occasion, she beat both Glass Slipper and Dragon Symbol. She returned finishing fourth of 14 in the G1 Nunthorpe. The ability is certainly there with this three-year-old, and it will be interesting to see where she lands come the Breeders’ Cup.

The easiest way to assure a place in the Turf Sprint is by winning one of the challenge races throughout the season. The races that are part of the Challenge series can be found here:

Who will win the Breeders’ Cup Turf Sprint at Del Mar:

It promises to be a very open Turf Sprint in 2021, with a number of credible chances. Of the favorites, we like the chances of Suesa. However, Campanelle may be a better selection at a bigger price (+1200). The three-year-old was a very impressive winner of the G1 Commonwealth Cup after a dramatic showdown with Dragon Symbol. We can scratch her run in the G1 Larc Prix Maurice de Gheest and she will be back to her best at Del Mar.