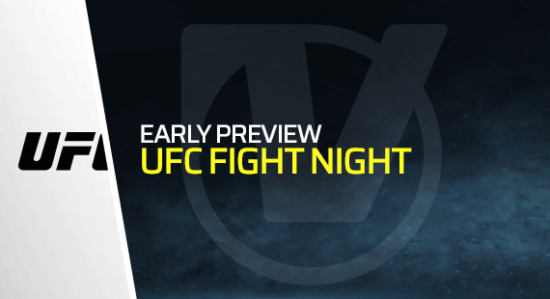 Following a four-week break over Christmas and New Year, the UFC is finally set to return this weekend.

The promotion’s state-of-the-art Apex Center will once again play host as fight fans prepare to see 2022 kick off with a bang.

This weekend’s Fight Night so far has 11 confirmed bouts with notable matchups including a feature Prelim showdown between welterweights Court McGee and Ramiz Brahimaj before Bill Algeo and Joanderson Brito open the Main Card.

Ahead of the UFC’s first event of the year – Vegas Odds has all you need to know, including start times, where to watch, the current betting markets, and more…

How to Watch UFC Fight Night: Kattar vs. Cikadze

Making his UFC debut, Brazil’s Joanderson Brito will be hoping to make an impression when he takes on Bill Algeo in Saturday’s Prelims opener.

Currently 1-2 in his first three UFC fights, Algeo is in desperate need of finding some consistency but will face a tough task when he takes the versatile debutant.

Both these fighters need a win.

Chase Sherman has lost two of his first three fights since making his UFC debut nearly two years ago and Jake Collier has not won back-to-back fights since 2014.

Although this is another bout that will be tightly contested, with 14 of his 15 career wins coming by way of knockout, I am leaning narrowly towards a Sherman finish.

Coming into this flyweight matchup, Colorado’s Brandon Royval is on a two-fight losing streak and will be under pressure to get back into the win column.

Rogerio Bontorin, on the other hand, claimed victory over Matt Schnell in his last outing back in May 2021.

Although I expect this one to be a close encounter, this is a dangerous matchup for Royval, and unfortunately for the Factory X prospect – I expect him to be left disappointed, once again.

Looking to derail her opponent’s momentum will be experienced Brazilian Jennifer Maia, who herself will come in off the back of a recent win.

With the margins so close in this one, it’s likely to come down to the toss of a coin.

Originally scheduled to fight Russia’s Muslim Salikhov, after being forced to withdraw, the UFC is now searching for a late replacement for fan-favorite Michel Pereira.

What a main event!

Both Kattar and Chikadze are hard-hitting and notoriously durable.

Although fight fans have yet to see the full extent of Chikadze’s toughness – when it comes to Kattar, following his brutal decision loss against Max Holloway last year, there is no doubting the American’s willingness to go to war.

While I expect this one to be a grueling encounter, I see no other outcome than a Chikadze win and the high-flying Georgian continuing his rise up the rankings.