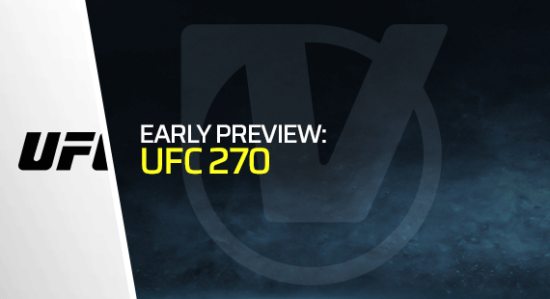 UFC 270, the first pay-per-view of the year, is now just a matter of days away!

The blockbuster card, which is scheduled for 14 bouts, is set to take place at the Honda Center in California on Saturday evening.

Kattar put on an incredible striking display to secure a well-deserved decision victory over Georgia’s Chikadze.

However, although still trying to catch their breath from last Saturday’s captivating main event, fight fans are already looking ahead to this weekend’s exciting event that will include two title fights.

Flyweight champion Brandon Moreno will be looking to defend his title against Deiveson Figueiredo with the pair’s trilogy set to co-main before hard-hitters Francis Ngannou and Ciryl Gane take to the octagon for an eagerly anticipated heavyweight unification title bout.

Ahead of what should be an amazing night – Vegas Odds has all you need to know, including start times, where to watch, the current betting markets, and more…

Latest From UFC 270: Ngannou vs. Gane

Both fighters have shown incredible potential but after losing his last two bouts, Michigan Top Team’s Stamann will be desperate to return back to the win column.

That won’t be easy against Nurmagomedov though. The Russian is incredibly well-rounded and has already proven he can win by multiple methods.

Although this one is tough to call, which is reflected in the odds, Nurmagomedov should just have enough to edge it.

Credit to Portugal’s Andre Fialho – there aren’t many fighters who would agree to make their UFC debut against Brazilian striker Michel Pereira.

Fialho will enter the UFC octagon for the very first time on Saturday night but the European is no newcomer when it comes to competitive mixed martial arts.

Fialho is on a four-fight win streak and although three of those victories came in UAE Warriors, a 2020 bout against former UFC lightweight James Vick in promotion XMMA saw the 27-year-old claim an impressive second-round knockout.

However, while there is no denying that Fialho isn’t a top prospect, the step-up in competition on Saturday should become clear.

Pereira is notoriously unorthodox and highly unpredictable – the South American fan-favorite is on a red hot three-fight win streak and while I do not agree the current odds match each fighter’s ability – it is hard to go against Pereira.

Who isn’t excited about this one?

Moreno and Figueiredo have already fought twice. UFC 256’s co-main event, which saw Figueiredo come in as champion, ended in a draw, ensuring the flyweight title would remain with the Brazilian.

Now set for a third encounter, this weekend’s UFC 270 will see Moreno look to defend his title for the very first time.

Although Figueiredo will be confident he can reclaim the title he previously held, beating Moreno is not easy and not something any fighter has managed to do since Alexandre Pantoja back in the summer of 2018.

Expect the flyweight title to head back to the Mexican city of Tijuana this weekend.

This matchup is a stylistic dream!

Africa’s Ngannou is known for his one-shot power. When the heavyweight champion connects, so do his opponents (with the canvas).

Looking to defend his heavyweight title for the first time since wrestling it away from former champion Stipe Miocic at UFC 260 last year, Ngannou will need to overcome former training partner and new interim champion Gane and that won’t be straightforward.

France’s Gane has quickly emerged as one of the most unique heavyweights in all of combat sport.

The powerful European is extremely technical and often displays the movement and footwork of a fighter much lighter.

Very intelligent when it comes to exchanges on the feet, Gane will likely come into Saturday’s main event looking to pick Ngannou off from range while simultaneously ensuring his hard-hitting opponent’s biggest threat is nullified.

It is so difficult to predict exactly how this one is going to go simply because we so rarely see a matchup of this kind.

However, regardless of how this mouth-watering unification bout ends, one thing is for sure – the tension inside the Honda Center when the cage door closes on Saturday night will be palpable.