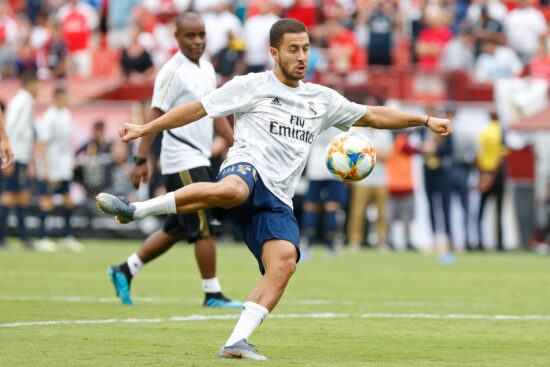 The possibility of seeing Eden Hazard in the MLS made the fans in the United States pretty fired up, but they will have to wait for a couple of more years before that happens. The fantastic forward is determined to stay in Europe and prove his worth.

The 31-year-old stated that he wants to stay at Santiago Bernabeu and play a significant role in Real’s quest this year. The Madridians won the UEFA Champions League last year and took the domestic title, but Hazard’s contribution was almost invisible.

He played 23 games across all the competitions, scoring just one goal, which is bad for a player who came to Madrid as one of the best in the world three years ago. Since joining Los Blancos, Hazard played only 66 games scoring six times, and spending more time outside the pitch than on it.

His constant problems with injuries and extra weight caused all this, and Real’s fans believe that the Belgian might be the club’s biggest bust in the last two decades. Real spent more than $115 million at the time to sign Hazard, who never justified that sum. That is why the club announced after the end of the previous season that it accepts offers for Hazard, making his future at Bernabeu very unclear.

However, speaking to ESPN recently about the possibility of playing in the MLS, the 31-year-old Galactico remains adamant he wants to prove himself in La Liga.

I don’t think about that much now, I’m just focused. It’s been three years [which have been] hard for me, so I’m just focused on this season. I still have a contract after two more years, and then we’ll see.

In two years I’m going to be 33, so let’s see what can happen. I want to show people that I can play in this club. It’s been a few seasons that I was not playing that much, so for me…

I just want to show what I can do on the pitch – that’s my only target.