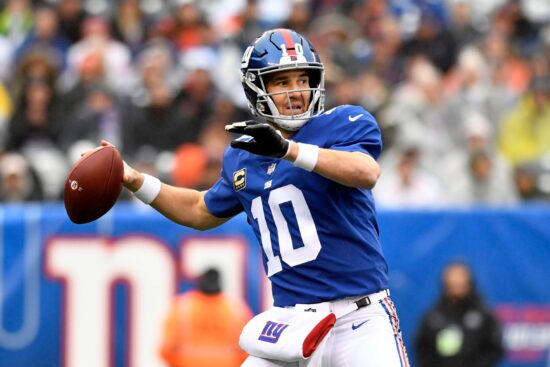 After spending 16 years as Giants’ quarterback, Eli Manning retired in early 2020. Fast-forward to summer 2021, and he’s back! This time, not as a player, but as a member of the front office team.

The two-time Super Bowl MVP is going to be in charge of the Giant’s fan engagement, working on, amongst other things, original content development. One of his first tasks will be the shooting of lifestyle series that’s planned to premiere later this year.

Manning, who’s now 40, remains synonymous with the Giants, who are the only NFL team he’s ever played for. The franchise bosses have decided to pay homage to their former QB by retiring his no. 10 shirt. On top of that, the Giants have also decided to include Manning in the club’s Ring of Honor.

The Giants are excited to have Eli Manning back in the team. Things felt differently last year without him around. No surprise there, as Manning had been a part of the Giants’ family from 2004 until his retirement in 2020.

Manning was supposed to continue his Giants’ story with a role within the organization, but COVID-19 intervened. Instead of being there to provide support and friendly advice, Manning had to spend the year 2020 outside the stadium.

After a one-year break, the Giants have reconnected with their legend. Manning is back, with a new job that’s meant to make the fans excited about the team once again. The Giants surely need his help, as their recent results have made even their most passionate fans feel lethargic.

With Manning as their starting QB, the Giants have achieved so many things, including winning two Super Bowls. However, the most recent of those Super Bowls happened in January 2012.

No Manning, No Playoff for the Giants

The last time the NY Giants played in the Playoffs was five years ago, in the 2016 NFL season. that’s when Manning’s form started to deteriorate, which prompted the Giants to draft a fresh QB in 2019. The man in question is Daniel Jones who arrived from Duke University.

In his rookie season, he took over the role of the starting QB from Manning, starting in 12 of 16 games. When that season finished, Manning decided to retire, which allowed Jones to reign supreme over the Giants’ QB position in 2020.

Unfortunately, he didn’t do much to help the Giants get anywhere near the Playoff sports. They finished in 11th place, with 6-10. The worst thing is that they were the team with the least number of points scored in the regular season in their conference, with just 280 points.

They need to improve their offense, which has been ranked as the worst of all the NFL teams by the analytics website Pro Football Focus. The good news for their fans is that the Giants have already surrounded their QB with plenty of talent. The bad news is that it doesn’t seem to be enough.

They remain one of the biggest underdogs for the 2021 Super Bowl at +6600. They’re also not among the main candidates for winning their conference, with +3300 on the Giants winning the NFC.

They are, however, expected to do better than in 2020. Last season we saw them getting only six wins, but this time, oddsmakers think they’re going to get more. The odds on the Giants winning seven or more games in the regular season are -143.